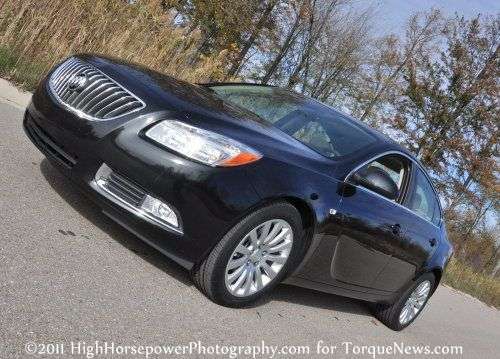 General Motors had a rough month like many other automakers in the Japanese-disaster-hit May 2011 but with a miniscule decline of just over 1%, the four remaining brands of GM were able to keep the automaker atop the sales chart for the US auto industry.
Advertisement

Buick was the strongest of the GM brands, posting a 24% improvement over May 2011 as the “affordable luxury brand” moved 15,579 cars and SUVs. The three models that returned from last year (Enclave, LaCrosse, Lucerne) all posted negative growth in May but the sporty new Buick Regal helped the brand show the big growth numbers with 4,247 sedans sold. The LaCrosse was the top seller with 4,774 units sold (although it was a decline in growth of 12%) followed by the Enclave with 4,323 SUVs sold. Buick should expect to see more success over the next few months the new compact Verano nears production along with rumors of a Chevy Volt based model for Buick – although that could be some time off.

GMC was the next best brand from General Motors in terms of growth as the official sponsor of the NFL posted an improvement of 8% over last year with 32,589 trucks, vans and SUVs sold. The Savana full sized cargo van was the top model in terms of growth with a 105% improvement over May 2010, followed by the Terrain with an increase of 54% and the Acadia with 29%. The Sierra pickup was once again the top model in terms of sales with 10.753 models sold, followed by the Terrain with 7,310 compact SUVs sold and the Acadia with 6,926 crossovers reaching consumers.

The Chevrolet brand was the third best of GM in terms of growth but, unfortunately, they posted a negative growth of 3.5%. However, with 161,401 vehicles sold last month Chevrolet was the top brand in terms of sales from the General and the second largest brand (next to Ford) in total sales. Chevrolet was lead in growth by the Equinox with 17,587 SUVs accounting for a 34% improvement, followed by the Malibu with an 18% gain and the Aveo with a 17% step up from May 2010. The top model in terms of growth was the Silverado pickup series with 28,409 trucks sold, closely followed by the Malibu with 25,600 sedans sold and the new Chevy Cruze with 22,711 compact sedans sold. Chevrolet can expect a little more help from the new Sonic once it official steps in and replaces the mild mannered Aveo.

Finally, the Cadillac brand pulled up the rear as the GM luxury brand posted a negative growth of 6% in May 2011 compared to May 2010. That was still better than luxury competitors Infiniti, Acura and Lexus but a decline of 6% is not the direction that GM wants their high end brand to be headed. The CTS lineup was top in terms of growth with an increase of 23% over last May followed by the Escalade EXT and Escalade ESV with 20 and 17 percent, respectively. The CTS lineup was also the top model in terms of sales volume with 4,288 sedans, coupes and wagons sold followed by the SRX crossover with 3,910 units sold and then there is a long drop to the outgoing DTS with 1,496 full sized sedans sold.

General Motors has lots of fuel efficient new models on the horizon and as we get nearer to those model hitting showrooms around the country, we can expect to see things continue to drop as consumers may wait for the newest and most efficient models to hit the streets.

Other May Sales News:
Ford shows no growth in a rough May 2011
Chrysler leads the Big 3 in May 2011 growth
Camaro leads in May 2011 as segment sales slow
The Nissan Leaf easily outsells the Chevy Volt in May 2011
Tacoma, Scion tC bright spots in Toyota May sales results