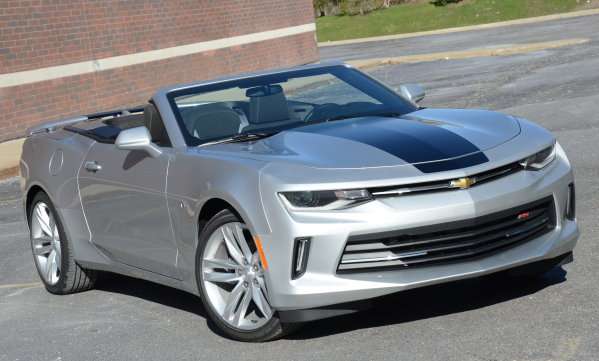 General Motors has announced that they will temporarily halt production at a handful of assembly plants around the US including those facilities which build the Chevrolet Camaro and the Chevrolet Corvette in an effort to burn through existing inventory – with the downtime ranging from 1-3 weeks depending on the plant.
Advertisement

In the American auto industry, automakers try to maintain an inventory supply level of around 70 days, but with some of their vehicles grossly exceeding those ideal levels, General Motors will idle production at five plants around the United States, including those plants which build the Chevrolet Camaro, the Chevrolet Corvette and a handful of other popular models. This will allow dealerships some time to sell off some of the cars already on lots around the country before building more. (Update: The C7 Corvette Inventory Is Diminishing Regardless of Upcoming C8 Reveal.)

Inventory Levels Across the Industry
Across the auto industry, companies try to maintain an inventory supply level of around 70 days – meaning that they have enough vehicles on lots around the country to satisfy 70 days’ worth of sales. When a company has a much larger inventory supply which is continuously growing, they are essentially building vehicles at a greater rate than they are selling, and that is bad for business.

Unfortunately, General Motors has a list of vehicles with a much larger inventory around the country, so they are halting production for a short time to reduce inventory levels. Those vehicles which are in-excess of the normal 70-day threshold are the Buick LaCrosse, Cadillac CT6, Cadillac ATS, Cadillac CTS, xChevrolet Impala, Chevrolet Malibu, Chevrolet Camaro, Chevrolet Volt, Chevrolet Cruze and Chevrolet Corvette – all of which are built in one of five plants around the USA.

As a result, GM will stop production at the Detroit Hamtramck plant (LaCrosse, CT6, Impala, Volt) and at the Fairfax Kansas plant (Malibu) for three weeks. The Lansing Grand River plant (ATS, CTS, Camaro) will pause for two weeks. The Lordstown Ohio plant (Cruze) and the Bowling Green Kentucky plant (Corvette) will each stop building cars for a week. The third shift at Lansing Grand River and Lordstown will also be removed altogether in January, presumably following this newly planned downtime.

It should be noted that GM isn’t expecting to get those vehicles all down to the 70-day supply level in the next few months, but the goal is to get their total fleet down around that 70-day mark. At the end of November, GM had an 87-day supply, but the company expects that number to be down around 70 days by the end of the year. With just 12 days left in the year, that seems like a tall task, but in any case, the planned downtime at those five plants next year should help cut the unnecessarily high inventory levels – especially for vehicles like the Camaro and Corvette, which don’t typically sell very well during the winter months.