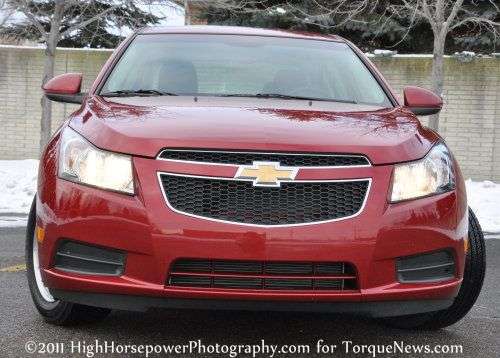 The new Chevrolet Cruze has quickly become one of the brand’s bestselling cars – even doing so well as to lead the segment in sales last month – and now it appears as though General Motors might offer up a 2-door coupe of the popular C-segment model.
Advertisement

The Chevrolet Cruze effectively replaced the Chevy Cobalt which had been introduced to replace the long-running Chevy Cavalier. The evolution from Cavalier to Cobalt to Cruze took just 6 years but in those 6 years, the compact lineup from Chevrolet has improved exponentially. The Cruze maintains the same low price relative to the rest of the segment but the overall quality of the vehicle has drastically improved. No more does buying a low cost Chevy mean that you get a low quality car and when you add the newfound quality of the Cruze with the fuel economy from the peppy turbocharged engine; it has quickly risen to be one of the most popular models in America. However, the Cruze is missing one important piece of the puzzle that benefitted both the Cobalt and the Cavalier – a 2-door model.

The Chevrolet Cobalt Coupe was an incredibly popular option in its 6 years of production, especially with younger buyers who don’t need the extra space of the sedan. While the sedan crowd might be snapping up the 4-door Cruze models, those who are after a compact coupe are sent looking to other models like the Honda Civic. However, rumors suggest that GM is putting serious thought into launching a 2-door Cruze in the US market…although the company has offered no confirmation thus far.

Along with the fact that a Chevrolet Cruze Coupe would make sense based on the popularity of the earlier Chevy compact coupes and competition like the Honda Civic Coupe; there is also the fact that the coupe could be even more efficient than its 4-door sibling. The Cruze Coupe would likely be a bit smaller and therefore lighter, so when the technology that helps the Cruze Sedan reach an impressive 42 miles per gallon is applied to these compact coupes – we could see a significant improvement in fuel economy.

According to The Detroit Bureau, the Cruze Coupe could be built at GM’s Orion assembly facility, where the Chevrolet Sonic (the replacement to the Chevy Aveo) is slated to begin production later this year. The Chevrolet Cruze Sedan is currently built at GM’s Lordstown Ohio facility but with that plant operating at full capacity even with overtime – there doesn’t seem to be room for the Cruze Coupe. However, if GM were to work up a 2-door Chevy Cruze based on the smaller architecture of the subcompact Sonic, building the Cruze Coupe in Orion Township makes that much more sense.

Fuel economy aside, the 2011 Chevrolet Cruze is a fun little car to drive. The turbocharged 1.4L Ecotec engine is designed for optimal fuel economy but it also provides enough spunk to provide for an enjoyable drive, so packing that same fuel-friendly drivetrain into a lighter, more nimble platform would likely be popular with the sport compact crowd. Just imagine someone taking that 1.4L Ecotec and adding a little more boost in a Coupe and we just might have the making of the Cruze SS…stay tuned!

Revitol scar re... wrote on July 5, 2011 - 7:38pm Permalink
If GM will be able to make this, it would be an awesome type of vehicle!
Piano Chord Pro... wrote on July 11, 2011 - 4:22am Permalink
This is a new vehicle! I want one of the these! Maybe two!
Marc wrote on October 23, 2011 - 10:18am Permalink
I have a Cobalt coupe and am ready to replace it. I'd love a Cruze coupe. I'd buy one tomorrow if they made them. I hate the thought of going to a Civic coupe. The 2012 is a terrible car. I can wait a couple years for a Cruze coupe if I have to. Please make one!
ExDetroiter wrote on November 8, 2011 - 11:26am Permalink
I have a Civic and would have loved to buy a Chevy if I'd had the choice to buy a coupe. The new camero never got to me as I have already owned a 1969 camero and as much as the new copy has style it is too much of a gas hog muscle car for my current driving habits to justify. I'd buy a Cruze coupe tomorrow if it was for sale now.