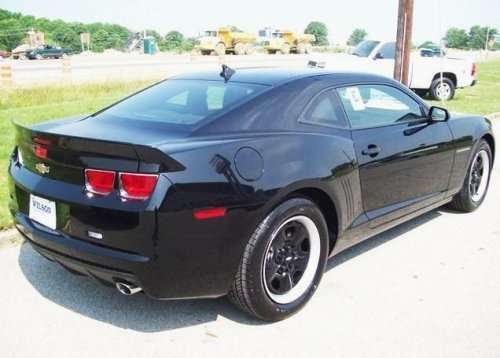 The 2011 Chevrolet Camaro is the bestselling model in its class, outselling the Mustang and Challenger every month this year and this success has helped the bowtie-clad muscle car see its 5 millionth production unit roll off of the assembly line at the Oshawa Ontario production facility.
Advertisement

You would think that a milestone like this would have included a high end trimline all dolled up, with a big presentation including the Canadian Prime Minister but instead, GM made no announcement at all and the 5 millionth Camaro built was a 2011 1LT model in black with black base model wheels. The car was actually built on May 16th but with the automaker offering no announcement, the news went unnoticed until the folks at ModernCamaro.com announced it this past weekend.

As mentioned, the 5,000,000th Chevrolet Camaro is a 2011 1LT model powered by the 312 horsepower V6 engine and a 6-speed manual transmission with black painted 18” steel wheels, a black exterior and black cloth interior. The dealership installed a GM dovetail spoiler (that looks great) and all said and done, the 5,000,000th Chevy Camaro carried a price of $24,700. The milestone Camaro has been delivered to a dealership near Lexington, Kentucky and waiting to be picked up by its new owner.

Some of you may be asking why GM wouldn’t have made an announcement about the 5 millionth Camaro and one small part of it could be the fact that Ford sold the 5,000,000th Mustang in the 1982 model year – 20 years earlier than the Camaro. However, it should be pointed out that the Mustang was introduced in 1964 where the Camaro didn’t drop until 1967, along with the Camaro essentially splitting sales with the Pontiac Firebird every year until both models were discontinued in 2002. Ford Motor Company made other versions of the Mustang, like the Mercury Capri, but the sales impact of those models paled in comparison to the sales comparison of the Camaro and Firebird. In any case, sales for the 5th generation of the Chevrolet Camaro continue to be strong with the GM muscle car leading every the segment in sales every month this year.

Congratulations to General Motors and Chevrolet for hitting this major milestone as their 5th generation of the Camaro continues to represent the name proudly – helping it to be the top selling muscle car in the world.

Source including the image: Modern Camaro

Thanks to The Baron for the heads up!