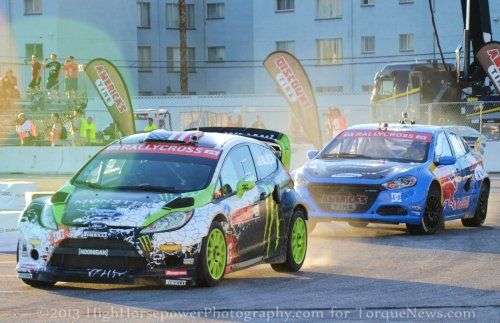 Global RallyCross back in action tonight on ESPN3

The 2013 Global RallyCross Championship season continues tonight as the drivers finally hit US soil at the New Hampshire Motor Speedway for the 4th race of the season – after beginning the 2013 GRC campaign included three events at XGames events in other locations around the world.
Advertisement

The first North American event of the 2013 Global RallyCross schedule takes place tonight at 5:30pm eastern standard time at New Hampshire Motor Speedway in Loudon, NH as part of the NASCAR weekend. The cooperation with NASCAR played a big part in the growth of the Global RallyCross Championship last season and it should have a similar impact this season as fans of the weekend’s NASCAR races have a chance to check out the high performance and impact world of rallycross racing.

The first American stop of the 2013 Global RallyCross schedule has the smallest driver roster of the season with just 13 cars planned to hit the starting grid tonight. Most notably, Liam Doran and his new Mini rally car are not in the field. Doran was a dominant force at the double header races at the Munich XGames so not having the Monster Energy Mini in New Hampshire improves everyone else’s chance at the win. Doran has shown that he is a force to be reckoned with but he wont be a concern for the 13 drivers racing tonight.

For those GRC fans who watched the previous events, there are several names that you won’t see racing tonight in New Hampshire in addition to Liam Doran. Most notably, the Volkswagen Polo rally cars driven by Anton Marklund and Mattias Ekstrom will not be racing tonight nor will Townsend Bell, who drove an OMSE2 Ford Fiesta in Munich. Bell wasn’t much of a factor in the previous two events from the Munich XGames but the VWs of Ekstrom and Marklund were in the hunt at all of the XGames rallycross races this season. As it the case with Doran’s absence, not having the VeeDubs in the field will make things a little easier for everyone else.

However, the New Hampshire Motor Speedway Global RallyCross win won’t come easily for any of the 13 competitors. With names like Deegan, Foust, Block, Heikkinen and Pastrana in the field, the driver who takes the win will have to beat some of the best rally racers in the world.

It will be interesting to see if any of the 3 Subaru WRX STI drivers can hammer out the issues that have plagued them all through the previous two events. Problems with the launch control system put the Subaru racers in an early hole while mechanical issues furthered their problems. The best finish for a Subaru racer at the 1st Munich event was 16th and none of the 3 qualified for the final race while the best finish in Munich race #2 was an 8th place for Sverre Isachsen. Bucky Lasek and Dave Mirra have both failed to qualify for a final race this season but with only 13 drivers registered to race tonight – only 3 cars won’t make it to the run for the win.

The New Hampshire Global RallyCross race will air live on ESPN3 at 5:30pm EST tonight (July 11th) but those who aren’t keen to watching online can catch the action at 7:30pm this coming Saturday at 7:30pm on ESPN.