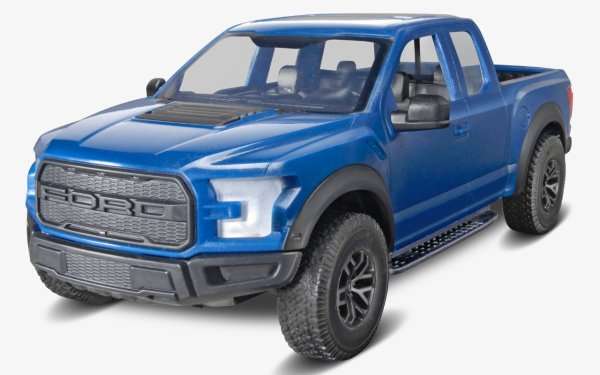 The 2017 Ford SVT Raptor F150 was one of the stars of the 2015 Detroit Auto Show and with the event reaching its final weekend, parents who take their kids to the Motor City show can get a free plastic model of the next gen high performance F150.
Advertisement

Ford Motor Company stole the show at the 2015 North American International Auto Show in Detroit with a trio of high performance models including the next generation Ford GT, the Shelby GT350R Mustang and the 2017 SVT Raptor F150. The Raptor will likely be the bestselling vehicle of these three and to help build early anticipation for the high performance off-road truck, Ford Motor Company has teamed up with Revell to give kids who visit the Ford display at the Detroit Auto Show a Raptor of their own.

The Revell SnapTite Raptor F150
When Ford introduced the 2015 Ford Mustang at last year’s North American International Auto Show, kids who came with their parents got a free plastic model of the new pony car. This year, although there was another new Mustang and a new Ford supercar on display, the Motor Company chose to do another plastic model giveaway for the kids, but this year Ford picked the new SVT Raptor F150.

“We are proud to continue this relationship with Ford and offer this new collectible F-150 Raptor SnapTite model,” said Lou Aguilera, Revell vice president and general manager. “We expect an enthusiastic response as kids build their own model of this impressive sport truck.”

The details are a touch foggy, but the company has announced that kids 8 and older can stop by the Ford brand display to get a free Revell SnapTite 24th scale model of the new Raptor F150. It is finished in the same black and blue hues as the real truck that debuted last week, and although there are very few individual components, it looks to be a very nicely detailed model.

For those parents wondering, the 2015 Detroit Auto Show tickets cost $13 for adults and children who are old enough to get the free Raptor F150 model will cost you $7. Remember, the show ends this Sunday, so you only have tonight, Saturday and Sunday to get to the show to both check out all of the great new models – and to get your kids a great new model of their own.

Coming to Stores This Summer
For those who aren’t able to go to the 2015 Detroit Auto Show, you can still get your hands on the Revell 2015 Ford SVT Raptor F150 Snap Tite model when they go on sale around the United States this coming June. The full sized 2017 Raptor F150 goes on sale in the fall of 2016, so hardcore F150 fans will have to satisfy their passion for the next gen SVT pickup in 24th scale for over a year before being able to buy the real deal.