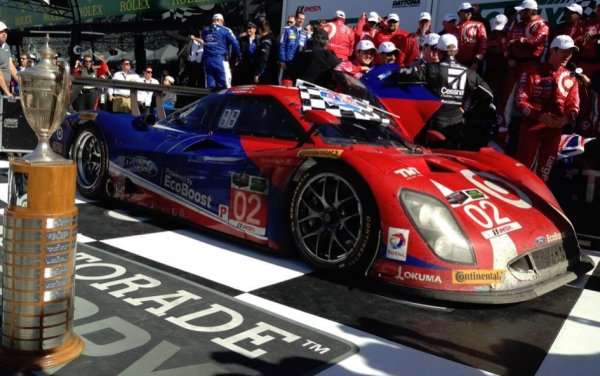 During the 2014 Tudor United Sports Car Championship, the key battle all season was that fought between the Ford EcoBoost Daytona Prototype and the Chevrolet Corvette Daytona Prototype race cars, with the Corvettes taking the majority of the big wins and the season championship. Ford came back to Daytona for the 2015 running of the Rolex 24 with the hopes of taking a bigger run at their cross-town rivals and while thinks looked bleak for the EcoBoost teams at various points in the race – a strong car, a strong pit strategy and a math error by the competition allowed the Ford EcoBoost DP to claim the overall win at the Rolex 24.

Looking Good in Qualifying
After dealing with some growing pains in their inaugural 2014 Tudor United Sports Car Champsionship season, the Ford EcoBoost Daytona Prototype teams rolled into Daytona International Speedway for the start of the 2015 endurance racing season with high hopes. Chip Ganassi Racing came out with two cars, including the #01 EcoBoost DP that would be driven by Scott Pruett, Joey Hand, Sage Karam and Charlie Kimball and the #02 EcoBoost DP piloted by Scott Dixon, Tony Kanaan, Kyle Larsen and Jamie McMurray.

In the first three practice sessions, the Ford EcoBoost DP teams weren’t the head of the class, but they still turned in solid enough times to compete with the competition from Corvette, BMW and Honda. However, when qualifying time came, the Ford teams were done running in the middle of the pack. The #60 Honda HPD car was the quickest in the Prototype class and in the entire field, but the #02 Ford driven by Scott Dixon turned in a solid qualifying run to start on the outside of row 1 while the #01 EcoBoost DP qualified third overall. The #5 Action Express Corvette qualified fourth overall and the ridiculous Nissan DeltaWing rounded out the top five on the grid.

Ford Leads in the Early Hours
While the Ford EcoBoost DP teams started behind the #60 Honda, it didn’t take long before both of the Ford race cars had pulled to the front of the field. At the 6 hour mark – which was the first scoring period of the Tequila Patron North American Endurance Cup – the #01 Ford was in the top spot while the #02 Ford was a close second.

The #01 and #02 Ford EcoBoost teams would battle at the front of the field with various other teams, including the #10 Wayne Taylor Racing Corvette DP, through the first six hours. Everything was looking very good for the Ford teams through the first quarter of the race, but around the 6.5 hour mark, the #02 Ford pulled into the garage area due to a front splitter issue that caused a combination of aerodynamic and cooling issues. This left the #01 Ford to spend the next few hours battling alone at the front of the field while the #02 Ford continued to make up the lost time.

Fortunately, the other frontrunners in the Prototype class ran into mechanical issues, including traction control problems for the #10 Corvette team, and this allowed the hard-charging #02 Ford to get back on the lead lap. By the early morning hours Sunday, the #02 Ford had worked its way back to the front of the field where it could go back to battle with the Wayne Taylor Racing Corvette – a battle which would continue until nearly the end of the race.

Troubles for the #01 Late
As many race fans were waking up and tuning in to catch the final quarter of the 2015 Rolex 24, it had become a 4 car race – with the #02 and #01 Fords battling with the #10 and #5 Corvettes. The #10 Corvette was looking like the top dog, only giving up the lead during rounds of scheduled pit stops, but then quickly regaining the lead when the rival Fords had to make stops of their own. During this time, the #01 team ran into clutch problems that prevented them from getting out of the corners hard, causing the team to quickly lose time to the leaders. The #01 car headed into the garage area for some transmission work, and that made the Rolex 24 a two car race for the win, with the #10 Wayne Taylor Racing Corvette battling with the #02 Ford EcoBoost, but with a couple hours of racing left, the Corvette seemed to be by far the quicker car.

Careless Math Error by the Corvette Team
As the race neared its final 15-20 minutes, Jordan Taylor in the #10 Corvette was breathing down the back of the Scott Dixon in the #02 when he suddenly shot down pit road. It turns out that Jordan Taylor was going to exceed the rule of 4 hours driving in a 6 hour stretch, so the Wayne Taylor Racing team’s math error forced them to make a stop that literally destroyed their chances of winning. This unplanned stop pushed the #10 Corvette down to third, leading the #02 Ford and the #5 Action Express Corvette to fight for the win.

Fortunately for Ford Racing fans, Dixon had a lead of over a second, and that was too much for the #5 Corvette to overcome in the final moments. This gave Ford its first Rolex 24 win, while also giving the team a great jump on the 2015 endurance racing season. During the course of the 24 hour race, the winner ran 740 laps, as did the #5 Corvette and the #10 Corvette.

The #01 Ford EcoBoost finished a disappointing 25th overall due to the late transmission problems.