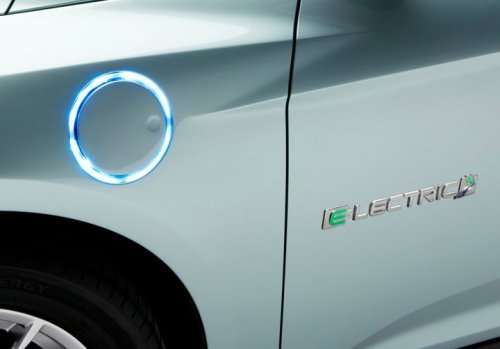 Ford teases the 2012 Focus EV ahead of its CES debut

Ford has made it public knowledge for some time that when the 2012 Ford Focus hits the US market, it will include a plug-in electric version and this morning, Ford debuted a teaser of the new Ford Focus Electric.
Advertisement

As you can see in the image on the left, this picture leaves quite a bit to the imagination but thanks to the distinct, sharp body lines crisscrossing where the front door meets the fender we know that this is the 2012 Ford Focus and the fancy Ford “Electric” badge on the door fills in the rest.

Prior to unveiling the fender/door shot of the 2012 Focus Electric, Ford began teasing fans of the Ford Electric Vehicle’s Facebook page with the innovative illuminated charging door on December 30th – with the light showing a quarter “filled”. The next day, there was the same picture with two sections lit followed by a third shot with – you guessed it – three sections lit up. Finally, today we were introduced to the picture you see here with the news that Ford CEO Alan Mulally will have “big news” from the 2011 Consumer Electronics Show in Las Vegas. We can safely assume that this big news will be the formal unveiling of the new Ford Focus Electric teased in the images in the gallery below.

The 2012 Ford Focus Electric is powered with the help of a 23kwh lithium-ion battery developed by LG Chem and rumors suggest that the Focus EV could have a range of 100 miles – making it the most capable electric vehicle available in the US market. Ford announced earlier this year that the Ford Focus Electric would see production with the first 2012 Focus EVs being released in the following markets late in the 2011 calendar year:
Atlanta, Austin and Houston, Texas; Boston, Chicago, Denver, Detroit, Los Angeles, San Francisco, San Diego, New York, Orlando, Fla., Phoenix and Tucson, Ariz.; Portland, Ore.; Raleigh Durham, N.C.; Richmond, Va., Seattle, and Washington, D.C.

We can also expect to see the 2012 Ford Focus EV at the 2011 Detroit Auto Show starting next week, so stay tuned to TorqueNews.com for comprehensive coverage of the North American International Auto Show.

LG's New EV Battery Plant Is a Welcome News for Tesla
Tesla Giga Berlin's New Hurdle: It's Not Only the Gov't, but Now Tesla Itself
END_OF_DOCUMENT_TOKEN_TO_BE_REPLACED