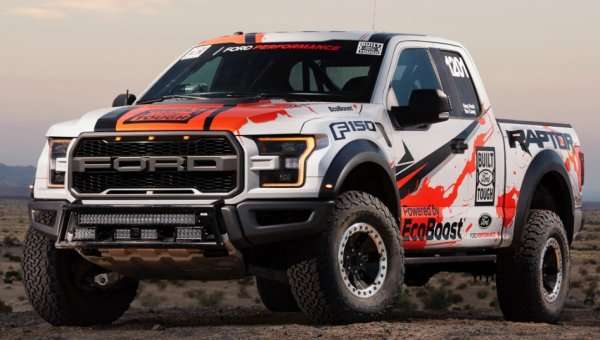 Ford Motor Company has announced they are taking a 2017 Raptor F150 off-road racing in the factory stock racing class of the Best in the Desert series, which will help to show off how rugged this new Raptor will be in the roughest conditions possible – and almost entirely with the same components that will be featured on the production road truck.
Advertisement

So, we still don’t know how much power the 2017 Ford Raptor F150 will have when it hits dealerships later this year, but we do know that it will be powered by a new SVT-tuned version of the 3.5L EcoBoost V6. Unofficial comments by Ford’s Raj Nair suggest that it will have 450 horsepower, but those numbers have never been verified by the automaker. We do know that the power will be sent to all four wheels via a new 10-speed automatic transmission and a new four wheel drive system that is promised to be the most advanced 4WD setup ever used by Ford Motor Company. We also know that the next generation Raptor will have a lightweight aluminum body, just like the rest of the modern F150 lineup and was the case with the previous gen Raptor – this new sport truck will have a high performance suspension setup from Fox Racing.

The next generation Raptor F150 should be the most capable F150 ever in terms of off-road performance and Ford wants to feature those capabilities in the roughest conditions possible – motorsports.

“The all-new Raptor has the DNA of a Baja race truck, with a purpose-built engine, chassis and suspension that enables it to travel fast over challenging desert landscapes or crawl over rocky terrain,” said Jamal Hameedi, chief engineer, Ford Performance.

Raptor Goes Racing
The 2017 Ford Raptor F150 will compete in the Best in the Desert off-road racing series this year and the company will set their sights on the factory stock class. Per the rules of the factory stock class, the Raptor will run the exact same 3.5L EcoBoost engines as the production trucks with absolutely no modifications, including all emissions components. The 10-speed automatic transmission and four wheel drive system will also remain untouched, but the class does allow Ford to swap out the factory shocks and springs for race-ready dampers and springs to add a touch more ground clearance. There is also a Ford Racing exhaust system, although the power gains from the bigger pipes should be minimal.

The exhaust, shocks and springs are the only performance modification permitted to the 2017 Raptor, but for safety’s sake, the racing EcoBoost F150 will have racing seats with harnesses, a roll cage, window nets, an off-road lighting setup and a fuel cell.

Oh, and it is one awesome looking production race truck.

The 2017 Ford Raptor F150 will hit the track for the first time on February 4th at the BlueWater Parker 425 in Parker, Arizona. Click here for a closer look at the schedule for the 2017 Raptor F150 in the Best in the Desert season.