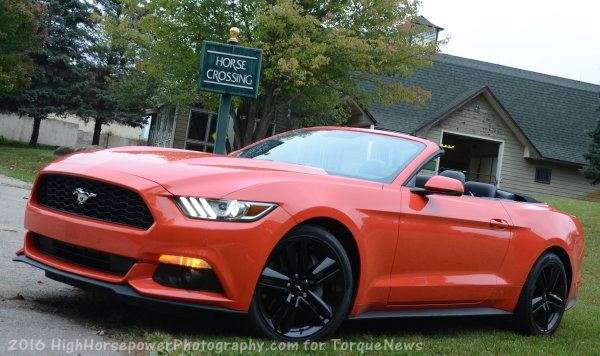 Ford Mustang was Germany's Most Popular Sports Car in March

When many people around the world are asked to name a country that is known for making great sports cars, there is a good chance that a great many of them will say Germany and I would imagine that most Germans would agree. However, when it came to buying a new sports car last month, it wasn’t a German car or even a European model that led the segment – it was the Ford Mustang.

That’s right – in a country known for building some of the best performance cars in the world, the Ford Mustang outsold every other sports car available in Germany last month. To make matters worse for the hardcore European sports car fans is the fact that during the first three months of 2016, the mighty Mustang ranks second overall, trailing only the Audi TT in total sales this year.

This information comes from a recent report by the German Federal Motor Transport Authority (KBA), so these are official government numbers – not figures doctored by an automaker or media outlet. These numbers are as legit as they get, and based on these facts, the Mustang was Germany’s most popular sports car last month.

March German Sports Car Sales
Traditionally, the bestselling sports cars in the German market are the Audi TT and the Porsche 911 – both of which are produced by German automakers. Audi moved 708 examples of the TT last month and Porsche sold 752 911 models, putting those two comfortably ahead of any other European or Japanese sports car sold in Germany. In most cases, that would be great news, but there is a problem. With 780 units sold in Germany last month, the Ford Mustang was the bestselling sports car in the market, beating both the Audi TT and the Porsche 911 lineup.

In doing some research online, I cannot find a time where the Ford Mustang ranked 1st in German sports car sales so I am inclined to believe that this is the first time that the original American muscle car has ever topped the German segment. With 780 units sold, the Mustang beat the Porsche 911 by 38 units and the Audi TT by 72 units, which these three cars being the only “sports cars” to crank into the 700 unit range. The Mercedes E-Class coupe was 4th with 532 units, the Porsche Boxster was 5th with 442 units, the Mercedes Benz SLK/SLC was 5th with 364 units. As we get further down the last, we have the Mercedes Benz AMG GT in 6th, the Porsche Cayman in 7th and the BMW Z4 in 8th.

If you look at the names on that list from 2nd to 8th, we have one Audi, one BMW, three Porsches and three Mercedes Benz models – every one of which is a German manufacturer. This shows the popularity of the German sports cars on their home turf, but at the top of the list is the Ford Mustang…a lowly American muscle car.

It should be noted that with the Maserati Ghibli in 9th and the Jaguar F-Type in 10th, the Mustang is not the only non-German car in the top 10 bestselling sports cars in Germany, but it is still the top of the segment.

For comparison, General Motors sold 79 Corvettes and 18 Camaros in Germany last month, and those are the only other American sports cars available in Germany right now.

Mustang Challenges for the Year
While it is obviously very early in the year, it should be noted that with 1,823 units sold in the first three months of 2016, the Ford Mustang is the second bestselling sports car in Germany for the year. The Audi TT leads the race with 2,299 units sold and the Porsche 911 is third, just behind the Mustang with 1,811 units sold. The only other sports car with more than 1,000 units sold this year is the Mercedes Benz E-Class. Sure, this could just be the big push for the first units, but if Ford can maintain a sales pace even close to 700 units a month - they could be the leader in German sports car sales for the year. It is a longshot - but it is possible right now.

What Difference Does This Make?
To most Americans, it makes no difference that the Ford Mustang was the bestselling sports car in Germany last month, but in the global auto industry – this is a big deal.

Consider this – the Ford Mustang, Chevrolet Camaro, Dodge Challenger and Chevrolet Corvette are the top four bestselling sports cars in America every year for the last 6 years or so. The Corvette, as the “worst selling” of those four moved 33,329 units in 2015 and as the leader in the segment, the Mustang sold 122,349 units last year. The highest ranking non-American sports car was the Lexus RC with 14,784 units sold and the bestselling German sports car in the US last year was the Porsche 911 with 10,101 units sold. Ford sold more than 12 times the number of 911s in America, yet in their home market, the 911 has started to struggle with the Mustang.

For the first time ever, the Ford Mustang is making a true push to be the bestselling sports car in the world and with the US and Germany locked down and more Mustangs reaching new markets every day – Ford is getting closer and closer to grabbing that title.

Steve wrote on April 10, 2016 - 7:52am Permalink
I am not surprised the Mustang delivers a lot more for their eurodollar than any Porsche you can buy. I wonder if the GT350R is sold over there? This is good news for the U.S. as the more Mustangs Ford sells the bigger their R&D budget will be I wouldn't be surprised to see the 2017 'Stang shed 100 lbs or more.