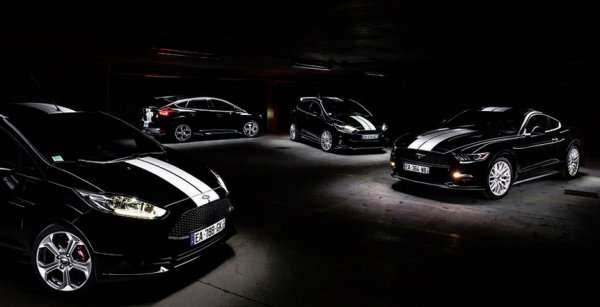 Ford Motor Company is celebrating its dominating win of the 1966 24 Hours of LeMans race with a limited run of specially decorated performance cars including the Mustang, the Focus ST, the Focus RS and the Fiesta ST – but these unique high performance Ford products will be offered in France, only.
Advertisement

Back in 1966, Ford Motor Company entered the 24 Hours of LeMans endurance race with the then-new GT40 race car and they walked away with not just the win – but the top three spots. The Ford GT40 was the first American car to crush the European competition and to celebrate the 50th anniversary of that incredible run, the automaker is offering a limited run of uniquely decorated performance vehicles specifically for the French market.

Like the #2 Ford GT40 which won the 1966 24 Hours of LeMans, each of these 50th Anniversary cars will be painted Black Mica and clad with full length grey racing stripes. Each vehicle also gets unique badging on the inside and outside, along with the standard features below, broken down by model.

The 50th Anniversary Fiesta ST comes with the Performance Pack and the Parking Pack, with the key features of those being the parking aids, the 17 inch wheels and red painted brake calipers.

The 50th Anniversary Focus RS include the City Pack, the Comfort Pack and the Premium Pack, which adds parking helpers, cruise control, a premium sound system and keyless entry.

Buy Soon, Win a VIP Trip to the Race
Those French Ford fans who order their 50th Anniversary of LeMans Edition Mustang, Focus or Fiesta before the June 18th running of the 24 Hours of LeMans race will be entered into a drawing to win VIP access to the race. The details on that contest are limited, but if you live in France, you are looking to buy a new performance car and you would like VIP access to the 24 Hours of LeMans race, check with your local Ford dealership about placing your order as soon as possible.

Ford is entering four examples of their 2017 Ford GT race car in the 2016 running of the race, so the person who buys one of these 200 special edition Ford performance vehicles could win a trip to see history in the making once again.