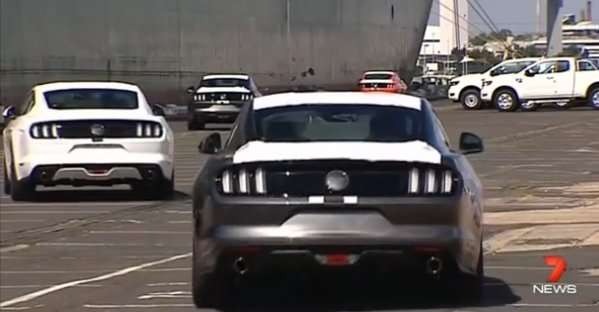 Ford Mustang Arrives in Australia, Sold Out Until 2017 (Video)

This first shipment of right-hand drive Ford Mustang coupes and convertibles reached Australia yesterday morning with 173 new pony cars destined for eager owners who ordered the car months ago – and those who preordered the new Mustang will be the only ones getting their American muscle car until at least early 2017.
Advertisement

While there have been aftermarket conversions to create proper right hand drive Ford Mustangs for the Australian market, the 2015/2016 Mustang is the first ever to be built in right hand drive configuration in the USA and shipped Down Under. Needless to say, this promise of a Mustang built for the Aussie market drew massive attention from prospective buyers and after waiting almost two years – the first batch of the right hand drive Ford Mustang has arrived at the Appleton Docks in Melbourne, Australia.
The first batch introduced 173 examples of the new Ford Mustang to Australia and the video below shows a variety of colors as well as both fastbacks and convertibles. As is the case in most non-US markets, Australian buyers will get to pick between the 2.3L EcoBoost 4-cylinder or the 5.0L V8 – both of which are available with either a 6-speed manual or 6-speed automatic transmission.

The arrival of the first 173 Ford Mustangs built for the Australian market is good news, but there is some bad news as well. Every one of these first 173 Mustang fastbacks and convertibles are spoken for, and the same is true of all of the Mustangs set to arrive next month…and every month next year. According to the news report in the video below, Ford has taken orders for 4,000 new Mustangs in the Australian market, which will literally require the rest of 2015 and all of 2016 to fulfill. Because of that, someone ordering a Mustang in Australia today will likely have to wait at least 14 months before getting their hands on their new American pony car.

That is likely a real downer for those folks who have been saving up for a new Ford Mustang without having preordered one, but having had the pleasure of driving the 2015 Ford Mustang in both EcoBoost and GT form, I can say without question that it is well worth the wait. The new Mustang is a masterpiece of engineering, combining excellent handling with ride quality that was previously unheard of from the legendary pony car. Add into that well-tuned chassis the powerful EcoBoost 4-cylinder or the 5.0L V8 and you have yourself one of the most engaging affordable performance cars sold in the world.

So, if you live in Australia and you ordered a Ford Mustang very early on, your wait should be nearing an end. If you ordered late or didn’t preorder at all, your wait could be lengthy – but at least the delivery process has begun.

Congrats to our friends Down Under for receiving their first Ford Mustangs built for their local roads – I sincerely hope that you love it as much as the 100,000+ people who have purchased one in the USA this year.