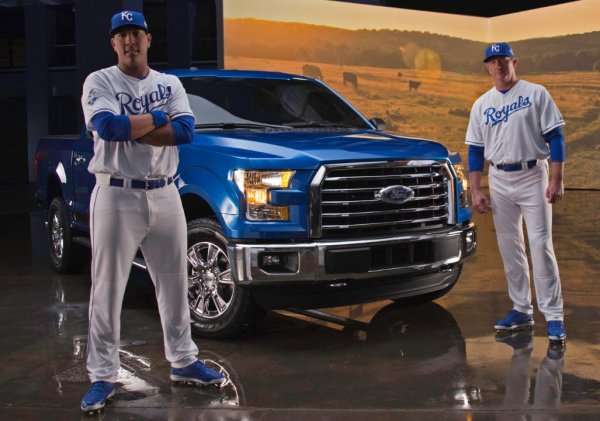 Ford Motor Company has announced that they will offer a limited edition Ford F150 to celebrate the Kansas City Royals World Series win and all 300 examples of the F150 MVP Edition will be built at the Ford plant in Kansas City.
Advertisement

The Ford F150 is built in Dearborn, Michigan and Kansas City, Missouri. The Kansas City Royals won the 2015 World Series and as we head into the 2016 Major League Baseball season, the Midwest Ford Dealer group has renewed its sponsorship of the Royals for the new season. To celebrate the Royals’ 2015 World Series win and the Motor Company’s ongoing partnership with the Kansas City area, Ford will offer a limited number of 2016 F150 pickups with the MVP Edition – all of which will be built at the Kansas City truck plant.

2016 Ford F150 MVP Edition
The 2016 Ford F150 MVP Edition is based on the 2016 F150 XLT in the SuperCrew configuration with the 5.5 foot bed. The vehicle picture features an EcoBoost V6 (based on the badging) and it appears to be a four wheel drive model, but there is no mention as to whether buyers can pick different drivetrain options. All of the MVP Edition F150 pickups will be either Oxford White or Blue Flame and all of these trucks will have the Chrome Package from the non-MVP F150 XLT. The MVP package also adds the polished lower rocker areas, spray-in bed liner and unique MVP Edition badging on the fenders.

Only 300 examples of the 2016 Ford F150 MVP Edition will be built at the Kansas City plant and all of these MLB-themed trucks will be sold at Kansas City area Ford dealerships. They are on sale now, so if you love the Royals and you want to celebrate their second championship with a new F150 – get to your local Ford dealership ASAP.

This is the second time that Ford Motor Company has done a Royals-themed truck. Back in 1985, the Royals won their first World Series and to celebrate that win, Ford built a special MVP Edition Ranger pickup. Now that the Ranger is no longer in the company’s North American lineup, the obvious choice is to make the new celebration truck the KC-built F150.

To kick off the 2016 sponsorship of the Kansas City Royals and to announced the new MVP Edition F150, Ford tapped Bret Saberhagen from the 1985 Royals and Salvador Perez from the 2015 team – both of whom are shown above with the chromed-out special edition F150 and both of whom won the World Series MVP award in their respective title year.