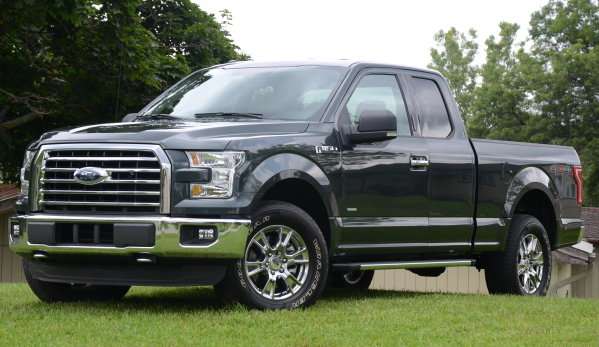 The sales figures from around the industry for 2015 are in and for the 34th consecutive year, the Ford F-Series lineup led by the 2015 F150 combined to be the bestselling vehicle in America – beating the Chevrolet Silverado, the Ram Pickup, the Toyota Camry and everyone else.
Advertisement

The Ford F-Series has once again claimed the title for the bestselling vehicle in America, with the new aluminum-bodied 2015 F150 leading the way as the Motor Company took the top seller title for the 34th consecutive year. Also, in beating out the Chevrolet Silverado and the Ram pickup which finished 2nd and 3rd respectively, the Ford F-Series is America’s bestselling truck for the 39th consecutive year. The top 5 list of America’s bestselling vehicles rounds out with a pair of Toyotas, as the Camry and Corolla claim the 4th and 5th spot overall as Toyota claims the top car title for the 14th straight year.

Ford Continues the Streak
The Ford F-Series led the entire American market in terms of new vehicle sales back in 2014, marking the 33rd straight time that the F150 and its siblings teamed up to win the top-selling vehicle title. Based on that, you would think that the full size Ford trucks would be an easy pick for the 2015 calendar year, but there were critics who insisted that the aluminum bodies of the new F150 were doomed to cause epic failure.

That epic failure never came. In fact, Ford sold more than 780,000 new trucks in 2015 compared to just 743k in 2014 and the majority of those trucks sold in 2015 were new, aluminum F150 pickups. As a result of the early success of the new F150 – even with the company being plagued with production delays – Ford was able to tie up the title of offering America’s bestselling vehicle for the 34th straight year and America’s bestselling truck for the 39th straight year. The last time the Ford F-Series wasn’t the bestselling vehicle in America, Ronald Reagan was in his first year as President, the average annual income in the US was just $21k and a new Ford F150 short bed pickup had a starting price around $6,300.

Among trucks, the Chevrolet Silverado was 2nd, the Ram pickup was 3rd, the GMC Sierra was 4th and the Toyota Tacoma was 5th.

Toyota Continues their Own Streak
The Toyota Camry was the bestselling car in the US in 2015, marking the 14th straight top car title for Toyota’s midsized sweetheart while also finishing 4th overall. The Camry was joined in the overall top 5 by the Toyota Corolla, which grabbed the 2nd spot among cars while the Honda Accord finished a close 3rd. The Honda Civic was 4th, the Nissan Altima was 5th and the first American car on the list shows up in the form of the Ford Fusion in 6th.

Congratulations to both Ford and Toyota on claiming bestselling titles once again!