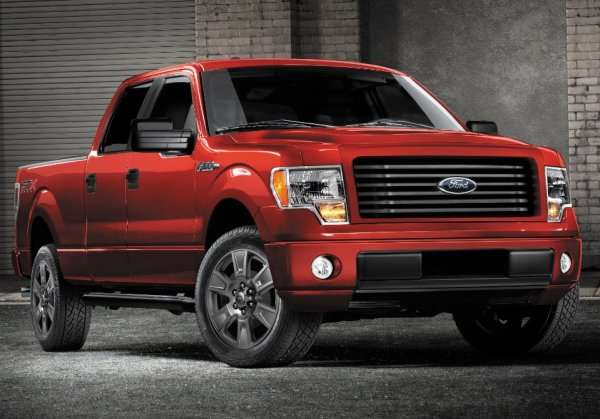 The value end of the 2014 Ford F150 lineup has gotten even stronger as Ford Motor Company has announced that for the 2014 model year, their STX trimline will be available in the large SuperCrew configuration as well as offering the new optional STX Sport package - moves that will likely entice more value minded buyers to the nation’s bestselling vehicle.
Advertisement

One of the reasons that the Ford F150 is so popular is because Ford Motor Company has a massive array of trimlines, packages and options that allow the half ton pickup to appeal to any prospective truck buyer. Whether you are looking for a very inexpensive pickup to face the rigors of work duty or a loaded up, high tech truck that is more like a luxury car that can tow a ton of weight – the current F150 lineup has you covered. For the 2014 model year, Ford is adding some frills and space to their low cost STX trimline that will likely help the F Series continue it’s amazing 2013 sales year.

The 2014 Ford F150 STX will now be available in the SuperCrew cab configuration with four large doors where the 2013 STX package was only available in the Standard Cab and SuperCab configuration. The SuperCrew is the largest cab option for the F150 and in addition to offering the most space – it offers the easiest access for those folks headed for the rear seats. The STX is positioned between the entry level ST package and the popular XLT package with an impressive list of features that are hard to find in an affordable half ton pickup. Items like a body colored front fascia, grille surround and rear bumper, the Power Equipment Group (adds power door locks, key fobs, one touch power windows and power exterior mirrors), 17 inch aluminum wheels, cruise control, Ford’s MyKey system, air conditioning and an AM/FM stereo with a CD player and auxiliary input are all standard on the F150 STX with a price starting just over $26,000 in standard can form.

Also new for the 2014 Ford F150 is the STX Sport package for those who want a sharper image inside and out. The STX Sport package adds 20 inch painted aluminum wheels, a black billet grille, black tubular running boards, unique black and gray cloth front seats with a standard central console in SuperCrew models and unique STX Sport decals on the bedside. This package is available with all cab and drivetrain configurations but Ford Motor Company has not yet announced the pricing for the new Sport package.

Ford will have 11 trimline packages for the 2014 F150 including the ST, STX, XLT, FX2, Lariait, FX4, Tremor, King Ranch, Platinum, Limited and the SVT Raptor. The Motor Company has already sold 427,935 F Series pickups through the end of July and with the continued growth of the F150 family – we can only expect to see sales numbers continue to grow as well.

LG's New EV Battery Plant Is a Welcome News for Tesla
Tesla Giga Berlin's New Hurdle: It's Not Only the Gov't, but Now Tesla Itself
END_OF_DOCUMENT_TOKEN_TO_BE_REPLACED