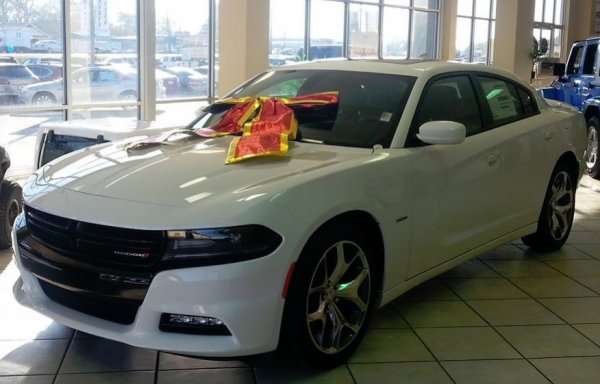 If you have been waiting to purchase the redesigned 2015 Dodge Charger, your wait is just about over, as the first units have begun reaching dealerships around country and while supplies are limited right now – gorgeous Charger R/Ts like the one shown above are on sale in time for the holidays.
Advertisement

While the 707 horsepower Hellcat package has been getting the majority of my attention lately, it should not be forgotten that the entire 2015 Dodge Charger lineup has a bold new look that some people love…and some people hate. I was on the fence at first, but I have come to love the new face of the Charger and it seems that many people who like the modern Charger in general share my views.

The 2015 Dodge Charger has made its rounds of the auto show and custom car show circuit (Woodward Dream Cruise, SEMA, etc), but the arrival of the first units in dealerships marks the first time that consumers will be able to drive them. Surprisingly, the arrival of 2015 Chargers to dealerships didn’t come with any fanfare from the Chrysler Group, but a post on Facebook revealed the arrival of the gorgeous white Charger R/T shown above.

The First 2015 Charger Arrives
Like other dealerships around the country, Chuck Stevens Dodge Chrysler Jeep Ram in Bay Minette, Alabama got their first 2015 Dodge Charger this week. The image above shows the bright white Charger R/T sitting in their showroom with bow on the windshield; and this would certainly make for one amazing Christmas present. So far, this is the only 201 Charger that has been delivered to Chuck Stevens DCJR, but other dealerships around the country will be taking deliveries of other trimlines and colors, with more and more cars being delivered each day.

While Chuck Stevens Dodge in Alabama might be out of your range to buy a 2015 Charger, dealerships in every major metropolitan area should have their first units very soon so if you really want to buy someone a new Charger for the holidays – you should be able to do so anywhere in the country except for maybe Alaska and Hawaii.

No Scat Pack or SRT Charger Yet
If you visit the Dodge.com website and build your own 2015 Dodge Charger, you will find that it is only available in SE, SXT, R/T and R/T Road & Track trimlines. There is no mention of the Scat Pack, SRT 392 or SRT Hellcat, so we can expect that all of the first 2015 Chargers shipped with have either the 3.6L Pentastar V6 or the 5.7L Hemi V8 while the SRT models with both the 6.4L and supercharged 6.2L Hemis coming during the first quarter of 2015. We knew early on that the Scat Pack and Hellcat wouldn’t be available at first, but it looks as though the SRT 392 will join them with a late arrival.

Expect a Spike in Charger Sales
As is the case with the arrival of any vastly redesigned model, we can expect to see a spike in Dodge Charger sales over the next few months. December sales will benefit from holiday specials and the arrival of the first 2015 units and in January, more 2015 models in dealerships will lead to more sales of new models along with discounts on 2014 models still on lots around the country.