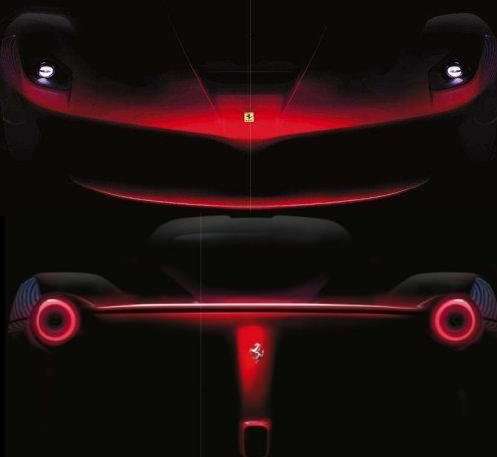 The 19th issue of the Official Ferrari Magazine is packed full of all of the usual Italian supercar and racecar information but the key feature of the newest virtual magazine is the best look that we have seen thus far of the new Ferrari Enzo replacement due to arrive sometime this year – a car which the Ferrari Magazine refers to as the F150.
Advertisement

The newest teasers of the new Ferrari supercar that will serve as the replacement to the legendary Enzo Ferrari show the front end and rear end from a straight-on angle that gives us the best official look that we have seen thus far of the upcoming supercar. Granted, the images are darkened so that we only get a good look at the shape of the nose, the headlights, the shape of the roofline and the large air intake located in the middle of the front end. Out back, we see a large set of single lens taillights, more of the roofline, the shape of the rear fenders and an interesting tail that appears to have an exhaust outlet right in the middle of the lower splitter. Even with the “poor lighting” providing a bit of cover for the new Ferrari supercar – these are clearly the best shots that we have seen thus far of the new supercar that will serve as the company’s flagship.

Oddly, the Official Ferrari Magazine article on this new supercar that spans some 16 virtual pages of the latest issue regularly refers to the Enzo replacement as the F150. You might remember that Ferrari used the F150 name (or tried to use it) on a special edition race car back in early 2011 but they agreed to change the name to the F150th Italia after Ford Motor Company took legal action over the Italian company using the name of their bestselling pickup truck. Previous rumors have indicated that the Enzo Ferrari replacement might be named the F70 - following in the tradition of previous Ferrari halo cars including the F40 and F50 – but now it seems that Ferrari is once again using the F150 name at least on an internal basis. Oh, and in their official company magazine. It will be interesting to see if Ford has anything to say about that this time around.

The large image on the right shows the two images together but they have been cropped down. For closer looks at the actual images along with a shot of each image adjusted to better show off the lines of the new Ferrari. Click any of the thumbnails for a closer look at all of them.
Along the front, we see a design that is not at all like that found on the Ferrari Enzo that it is slated to replace. The front end is very wide with large, squared fenders that likely leave just enough room to tuck over some massive tires. We see this same fender design out back – all of which makes this car look a great deal (based on these images) like a LeMans prototype race car. The F150 (or F70) also wears a rounded roofline with a “double bump” design that is familiar in the racing world as this design yields improved aerodynamics while leaving room for two occupants with helmets. Of course, the Enzo successor will feature projection headlights while a large central opening on the nose of the car and the large lower fascia opening will provide air intake for the engine intake and cooling systems.

The rear end picture of the new Ferrari F150/F70/Enzo successor offers a little less detail but we can see a set of bright, single tail lights similar to those on the 458 Italia mounted at the back of a large set of square fenders. There appears to be a molded spoiler running between the two taillights with a large open section below that continues to indicate styling cues from the world of prototype racing. Finally, the F150 has an opening low on the rear fascia that could be the exhaust outlet for the high revving V12 engine that will power the Enzo successor when it arrives.

Regardless of what it is called, the Ferrari F150/F70 will be powered by a high revving V12 engine that provides somewhere in the area of 800 horsepower while a hybrid drive system featuring Ferrari HY-KERS recovery system will add an extra 100 horsepower of its own. Combine 900 horsepower with the fact that the race inspired chassis design should put the curb weight around 2,550 pounds and Ferrari will very likely have the highest performance road car that they have ever sold. 900 horsepower in a 2,550lb car could also make this the highest performance car ever sold for street use in the world.

Click here to head to the Official Ferrari Magazine on Facebook where you can flip through the virtual pages of the magazine – having a look at this new hybrid supercar for yourself. You can also click any of the thumbnails on the right side above for a closer look at the new Ferrari supercar teaser images, both as they appear in the magazine along with a few that have been altered to accentuate the lines of the car a bit.