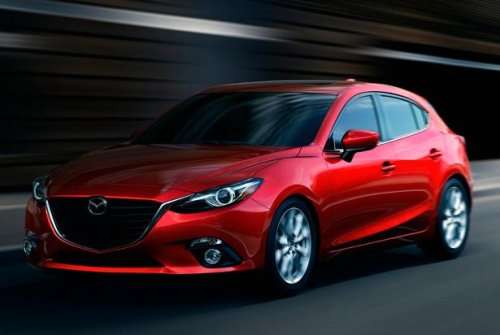 Following an early online debut via a Czech website that ignored he embargo, Mazda has announced all of the juicy details on the 2014 Mazda3 along with a full complement of images of their sleek new C segment hatchback.
Advertisement

As you can see in the images here, the 2014 Mazda3 shares the distinct KODO design language that has done wonderful things for the larger Mazda6. In fact, at first glance the new Mazda3 looks so much like the Mazda6 across the front end that these images could be mistaken for a hatchback version of the 6 sedan. Contributing to the Mazda6-like appearance is the fact that the new Mazda3 is longer, lower and wider than the current models. With a wheelbase of 106.3 inches, the 2014 Mazda3 is 2.4 inches longer than the current model between the wheels while car from bumper to bumper drops by 1.8 inches to a total of 175.6 inches. The new Mazda3 is just over a half inch shorter than the current models (57.3 inches wide) and 1.6 inches wider (70.7 inches width). The result of these dimension changes is a car that has a sportier stance while also offering comparable and greater interior space for passengers and cargo.

We can expect that the 2014 Mazda3 will be available with three wheel options – 16 steel wheels with hubcaps, 16 inch alloy wheels and 18 inch alloy wheels – while coming in 8 exterior color options. Mazda hasn’t list all of those colors but we know that the gorgeous Soul Red hue shown here will be available along with two new shades - Titanium Flash Mica and Deep Crystal Blue Mica. "With more than 3.5 million vehicles sold globally, the Mazda3 is the brand's best-selling and most recognizable name plate, and its redesign for 2014 shows just how much attention to detail and care we put into this important vehicle," said Jim O'Sullivan, president and CEO, MNAO. "SKYACTIV TECHNOLOGY and KODO have performed as advertised and received critical acclaim, with even more technologies and materials to be introduced with the 2014 Mazda3. On the heels of the launch of the 2013 CX-5 crossover SUV last fall and the 2014 Mazda6 early this year, this is an exciting time for Mazda, and we're only getting started." Powering the 2014 Mazda3 here in the United States are a pair of 4-cylinder engines that feature the Skyactiv technology that has made so many other Mazda vehicles impressively powerful yet surprisingly efficient. While no fuel economy estimates have been offered thus far, we know that the 2014 Mazda3 will come with a standard 2.0L Skyactiv-G gasoline engine that packs 155 horsepower and 150lb-ft of torque and an optional 2.5L Skyactiv-G gas mill that offers 184 horsepower and 185lb-ft of torque. Both of these engines will be available with the buyer’s choice of a six speed manual or six speed automatic transmission. Also, the 2014 Mazda3 will come with a regenerative braking system that charges a capacitor that is used to power the electronic accessories throughout the vehicle.

Inside, Mazda promises that the 2014 Mazda3 will offer a driver oriented cockpit with featuring a new heads up display that appears on a small screen that rises out of the dash. Unlike other systems that project an image onto the inside of the windshield, the Mazda Active Driving Display features a see through panel that rises out of the dash in the area between the top of the gauge cluster and the windshield. This shows the vital information that a driver needs to know without requiring the driver to take his or her eyes away from the road. Also, for those who don’t like the heads up display design – the screen lowers back into the dash when it is not wanted. In addition to this new heads up display, we can expect that the 2014 Mazda3 will have a plush interior and cutting edge infotainment technology featuring a high end Bose sound system. We can expect the 2014 Mazda3 to hit North American Mazda dealerships this fall. Pricing, fuel economy figures and full features will be announced closer to the dealership debut later this year.

Tesla Contemplates A New Strategy for China Retail even As Sales Boom
Jay Leno on Elon Musk & EVs: “I Think He Should Get ... Credit"
END_OF_DOCUMENT_TOKEN_TO_BE_REPLACED