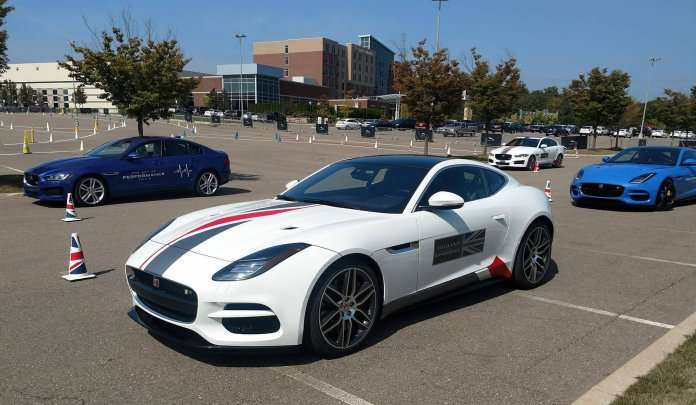 Experience the Jaguar Art of Performance Tour in Detroit This Weekend

The Jaguar Art of Performance Tour stops in the Detroit area this weekend and if you are within reasonable driving distance of the event, this is most certainly something that you will want to do this weekend – as Jaguar will let you drive their performance cars hard for free.
Advertisement

Yesterday, I attended the Jaguar Art of Performance tour event in Detroit (Novi, Michigan, to be exact) and it was an absolute blast. If you live in the Detroit area or within reasonable driving distance of Novi, Michigan, and you are interested in driving some of Jaguar’s high performance cars and SUVs on the road and on a series of autocross type courses – you will want to make sure that you sign up right away for this free event.

The Jaguar Art of Performance Tour
Jaguar’s Art of Performance tour is really like nothing I have ever experienced, offering me a chance to check out the latest and greatest production cars and concept cars from the British automaker along with driving several of their new vehicles on the road and on an impromptu autocross course. Attendees also get to make a short mini-movie starring themselves as the skilled driver of a new Jaguar as it flees some bad guys in BMWs and best of all, the whole thing is free and it is open to the general public. All you have to do is register on their website.

There are four basic phases for attendees of the Jaguar Art of Performance Tour.

The first phase is the movie-making step, where you go through the paces of making an action movie where you are a higher driver escaping in a new Jaguar from some violent evildoers in BMWs. They do your make up, they explain to you how to “act” in front of the cameras and when you are done, you get a shareable short movie featuring your acting skills and the new Jaguar lineup.

Next, you head outside for an on-road drive of either the Jaguar F-Pace or the Jaguar XF, experiencing these vehicles on surface streets and the highways before heading back to the event for the next step.

That next step is my favorite, as you get to pilot a new Jaguar F-Type through their unique Smart Cone course. Jaguar has literally invented a new way to do autocross, with a series of 6 “gates” with LED lights on top of them. As you progress through the course, you are aiming for the gate with the green lights while the gate with the blue lights is the next to turn green. You are scored on time, distance traveled and accuracy, and although you are in a tight space, you can really let the F-Type rip as you blast from gate to gate. When you are done, there is a scoreboard with all of your stats, showing you how efficiently and quickly you made it through the constantly-changing course.

Finally, the last step of the Jaguar Art of Performance Tour is a more traditional autocross track, where you get to pilot the Jaguar XE and the 550hp Jaguar F-Type R through an intricate course of cones. Like most autocross courses, this one has some tight turns which test the braking and agility of the cars, but there are also some short straights which allow you to put the hammer down.

For safety’s sake, each of the driving phases has a professional driving instructor in the car with you, so you have someone coaching you on how to get through the LED gates and the autocross cones quickly and safely…but you do get to push these new Jaguar vehicles harder than most people ever will on the road.

In addition to the driving and movie-making portion of the event, there are also examples of every current Jaguar vehicle on display, including the new E-Pace, the new XJR575, the new XE Sportsbrake and the Project 8 Concept.

The Detroit Art of Performance Event
The Jaguar Art of Performance event in Detroit officially begins today and runs through Sunday the 24th and the most impressive aspect of this event is that it is free to the general public. The only requirements to register online are that you are 21 or older and that you have a driver’s license. Provided that you meet those requirements, you can sign up (by clicking here) on Jaguar’s US website, picking your day and time, and you will be all set to go drive some awesome high performance British vehicles in Metro Detroit.

Seriously folks, if you are in the Metro Detroit area and you want to experience the new Jaguar lineup in a fairly high performance situation, you need to attend this event. If nothing else, the autocross portions are worth the drive to Novi.