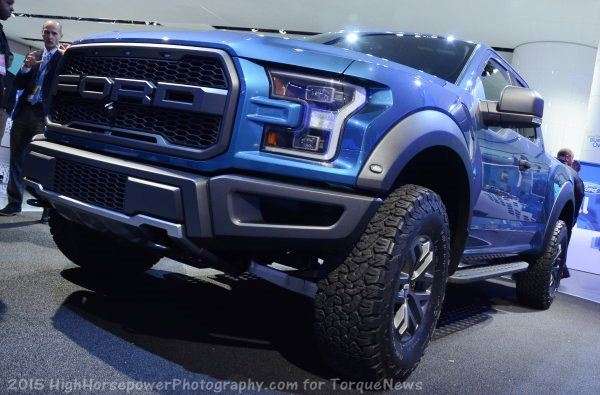 The 2017 Ford SVT Raptor F150 made its grand debut back in January at the 2015 Detroit Auto Show with an all-new 10-speed automatic transmission – one that will soon make its way into the entire Ford F150 lineup.
Advertisement

When the 2017 Ford SVT Raptor F150 was introduced at the 2015 North American International Auto Show in Detroit, there were some aspects that we had expected and some aspects that came as a surprise. As expected, the next generation Raptor applies the styling of the previous generation Raptor to the body of the new 2015 F150 and like the standard F150, the new Raptor has weight saving aluminum body panels. What we really didn’t see coming was the SVT-tuned 3.5L EcoBoost V6 mated to a new 10-speed automatic transmission rather than the throaty V8 and proven 6-speed transmission in the previous Raptor F150.

According to the folks at Ford-Trucks.com, the 10-speed automatic transmission from the new Raptor will soon be used throughout the entire F150 lineup, giving the standard half ton pickups some of the same advantages as the high performance SVT version.

The new 10-speed transmission will help improve performance and fuel economy, as the numerically lower gears (1st, 2nd, 3rd) can be geared more aggressively for better low end acceleration and better low end towing power while the numerically higher gears (8th, 9th, 10th) will be geared in such a way to keep engine RPMs very low when cruising, which improves fuel economy. On paper, it seems like a great idea, provided that the new 10-speed gearbox is tough enough to stand up to the abuse handed out by Raptor F150 owners. When mated to the 450hp EcoBoost V6, this new transmission should make the 2017 Raptor an all-around better performer while also making it more efficient than the outgoing version that had the 6.2L V8 and the 6-speed transmission.

Coming to the Full F150 Lineup
As soon as the new 10-speed transmission was introduced in the next generation Raptor, it was speculated that the entire F150 lineup would get this transmission and when conversing with an F150 project manager on Facebook, Ford-Trucks.com’s Chad Kirchner learned that the entire lineup will soon get this new transmission. This will bring all of the advantages that will be enjoyed by Raptor owners to buyers of the lower performance models, which will have the same effects and maybe – just maybe – it will help the F150 become the most fuel efficient truck on sale today.

Right now, the 2015 Ford F150 with the 2.7L EcoBoost V6 and the 6-speed transmission is the most fuel efficient gasoline powered half ton truck in America while the Ram 1500 with the EcoDiesel is the most fuel friendly truck in the half ton segment. A big part of the Ram lineup’s fuel economy advantages come from their 8-speed automatic transmission, so in dumping the 6-speed for the new 10-speed gearbox, the future F150 should be able to at least close some of the ground between their segment leading (gas powered full size trucks) gas truck and Ram’s class leading diesel.

Unfortunately, there was no clear time frame as to when the 10-speed will reach the rest of the Ford F150 lineup, but with the Raptor expected to arrive for the 2017 model year, I would expect that the rest of the lineup would get the new transmission then – if not for 2016.

wilie wrote on April 14, 2015 - 6:04am Permalink
Ford GT is composed with exceptionally current plan however a few points of interest are kept as the DNA from its incredible unique models.
larry parham wrote on July 17, 2015 - 2:54pm Permalink
NOT what I wanted to hear. I have been waiting a year to by a ford f150 platinum with a 10 speed while everybody else already has an 8 speed. I have bought f 150's since 1977 when I bought my first truck.
John Walker wrote on August 2, 2015 - 5:38pm Permalink
I use my truck as an around town second car, with occasional camping/fishing trips into the Rocky Mountains. I very seldomly haul big loads so I don't need big hp. I would love to get well over the 14/15 mpg that my 2005 F150 acheives. I have been anxiously awaiting the aluminum F150 with a 10 speed transmission mated to a small ecoboost. Perfect for folks like me....hope it comes sooner rather than later.
Lanz McBean wrote on December 12, 2015 - 2:50pm Permalink
I currently have the 2001 Ford explorer sports trac truck, and was hoping the f150 would get the 10 speed transmission by 2015 so I can invest into a new truck. Now I understand it could be another 2 years wait until 2017...come on Ford, the wait is to long for loyal Ford enthusiasts.
john rose wrote on December 24, 2015 - 12:21pm Permalink
Im dissapointed it was not available in the 2016.I really need to change my 2012 before it depreciates any more. Any chance we will see it before 2017?
John wrote on January 8, 2016 - 4:47am Permalink
The raptor will be available in north america for fall. 2016, I don't see why other lower models like the platinum lariat etc won't include the 10 speeds by then as well. Only 6 more months lol!! I'm anxiously waiting as well for the new raptor to be released
Richard wrote on January 24, 2016 - 7:23am Permalink
Just maybe it is time to leave the Ford brand behind as I am liking a diesel half ton, be looking at the Dodge with the 8 speed Transmission and the best fuel economy. Been Ford man and family all our lives, thinking it just maybe time to switch it up.
Sam Ford wrote on May 7, 2016 - 7:23am Permalink
You will all change your minds when you see the sticker prices on the F150,$40,000-$55,000 for a pickup truck is ridiculous! Anyone who has payments of 6,7,8 hundred dollars on a vehicle is a fool.
Rob wrote on July 5, 2016 - 12:20pm Permalink
Not everyone has to make payments.
John Walker wrote on July 5, 2016 - 4:03pm Permalink
I won't be buying new, I always buy one or two years used....low mileage. The price will still reflect the high initial price, but I will avoid introduction flaws this way, also.
Richard wrote on July 6, 2016 - 12:38pm Permalink
Was looking at the f150 aluminum box, man, the tool box cut right through the bed of the box when pushed off of its fender and only scratched the tundra. not sure I am going to bother with the ford even if it comes out with 10 speed transmission. Ford tough is no longer applicable is it. Ford quality was job 1 long ago as well. pretty disappointing to see whats happened.
gary wrote on September 23, 2016 - 8:52pm Permalink
I OWN A 1937 FORD WITH CHEVY 350 ENGINE AND TURBO 350 TRANS, WITH 10 BOLT REAREND. I WANT TO PUT ALL FORD RUNING GEAR IN IT WITH THE FORD ECOBOUST AND A AUTOMATIC FOR REARWHEEL DRIVE. WHAT F-150 COULD I USE FOR A DONOR?