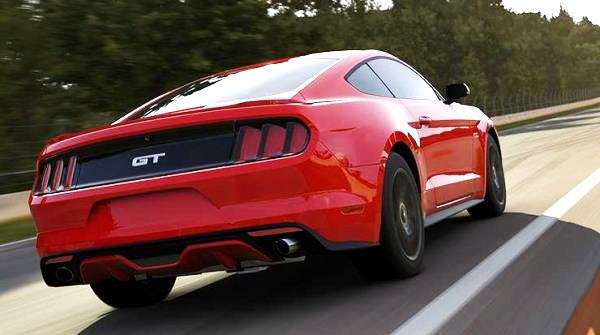 Attention Forza Motorsport 5 gamers who have been eagerly awaiting the opportunity to drive the 2015 Ford Mustang GT in the virtual world – today is your day, as the next generation Mustang has finally come to the industry leading driving simulator for Xbox One.
Advertisement

Forza Motorsport 5 has asserted itself as the top driving simulator in the gaming world, but until now, the new 2015 Ford Mustang has not been available for the incredible driving game on Xbox One. However, that all changes today with the release of the latest downloadable content pack (DLC) for August 2014 as the 2015 Ford Mustang is joined by five other cars and a host of gameplay improvements that should make a great game even better.

Introducing the 2015 Ford Mustang GT – Forza 5 Style
At long last, the 2015 Ford Mustang GT has arrived in the virtual dealership of Forza Motorsport 5. I had a chance to drive the car (on the game, of course) and it is really a beautifully modeled, virtual replica of the real thing. Interestingly, it is clear that the folks on the Forza 5 development team began working on the 2015 Mustang before the official power specs were announced, as the FM5 Mustang GT “only” has 421 horsepower and 391lb-ft of torque. The actual 2015 Mustang GT packs 435 horsepower and 400lb-ft of torque so the Forza version is a touch underrated – but that could change with a future update. The good news is that the weight of the 2015 Mustang GT on FM5 isnt quite right either, being lighter than the actual Mustang GT fastback. In the real world, the Mustang GT fastback weighs 3,704 pounds with a manual transmission while self shifting models weigh 3,727. On the other hand, the FM5 Mustang GT weighs 3,618 pounds – which is the curb weight of the 2014 Mustang GT coupe with a manual transmission. This light curb weight with the current power output gives the S550 Mustang GT an in-game rating of 517, putting it in the B Class.

The other shocking number for the Forza 5 2015 Mustang GT is the price. While VIP FM5 gamers will get the Mustang GT for free, those who did not opt for the VIP version of the game with have to shell out a hefty 50,000 in-game credits – making it considerably more expensive than the real world Mustang GT in US Dollars.

Other August Forza 5 Car Pack Additions
In addition to the 2015 Ford Mustang GT, the August update for Forza Motorsport 5 adds the 2013 Vauxhall Astra 1.6 Tech Line Top Gear Edition, the 2014 Infiniti Q50 Eau Rouge, the 2014 Infiniti Q50S, the 2014 Rolls-Royce Wraith and the 2014 Renault Spark SRT_01E – creating an impressive spread from an electric Formula One (technically Formula E) car, a super luxury car, a couple Japanese luxury cars and an affordable performance compact. Oddly, the Vauxhall was not pictured in the release announcing these new models, but you can have a look at the other 5 new cars in our gallery by clicking any of the thumbnails above.

Gameplay Improvements and a New Rivals Series
In addition to the 6 new cars, the August update for Forza Motorsport 5 includes improved gameplay via a variety of available Xbox One steering wheels that should improved the feel and accuracy of the steering wheels from MadCatz and Thrustmaster. Also, the exterior designs of opponents cars when playing online should load more accurately and quickly during racing. Finally, the Rivals mode now includes a new Formula E event and the gamer with the quickest lap times will win a trip for two to the Formula E championship race in Berlin, Germany on May 30, 2015.

Winning a trip to Germany for playing a video game? That is a pretty sweet deal. And to think…your mother told you that wasting time with video games would never get you anywhere.