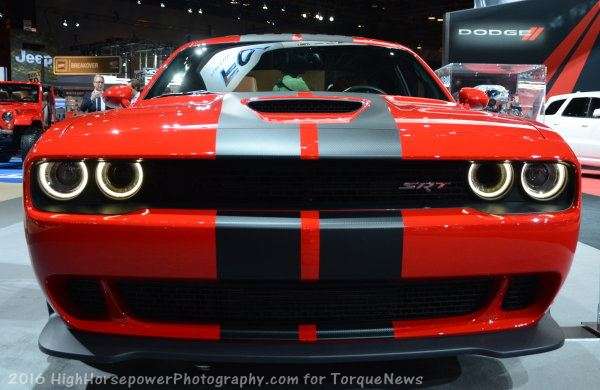 As we near the summer of 2016 the of 2017 Dodge Challenger is just around the corner, but despite some rumors floating around the internet, we shouldn’t be expecting big changes for the 2017 model year – although that should be a different story for 2018.
Advertisement

Why No Changes in 2017?
The rumors floating around the internet insist, once again, that 2017 will be the year in which the Dodge Challenger goes from being the big, brawny muscle car that it has been since being reintroduced for the 2008 model year to something smaller – more like the modern Ford Mustang or Chevrolet Camaro. There is most certainly a chance that the Challenger will eventually become smaller in order to better compete with the Mustang and Camaro, but it won’t be happening for 2017.

How do I know?

If there are any changes to the 2017 Challenger lineup, I would expect them to be limited to a couple of new exterior colors and – if anything remotely major is announced – I would expect it to be some sort of lighter weight Hellcat model. The Hellcat is a remarkable machine, but there is no question that it comes with a collection of features that you don’t need to go fast. Removing some of the luxury items and essentially making a Hellcat Core model would lower the price and the curb weight.

Changes Should Come for 2018
The prevalent rumor over the past few years is that the 2018 Dodge Challenger will bring about the next generation of the modern Mopar muscle car. There has been no official word to support any of these rumors, but a handful of insider sources have suggested that 2018 could be the year that the Challenger finally moves to a new platform.

The current Dodge Challenger has ridden on the same basic architecture since being introduced back in 2008, so even with the strong sales over the past year, the Challenger is due for a complete refresh. Rumors suggest that the next generation Challenger will be based on the same chassis platform as the new Alfa Romeo Giulia, which should make the Challenger smaller and lighter, but how much smaller? Once advantage that the modern Challenger has always had over the Mustang and Camaro is that the back seat can actually be used by adults, but shrinking the Challenger down to more closely compete with the cross-town rivals could kill rear seating space. However, if Dodge can preserve space and cut the weight down, the current engine lineup could allow the next Challenger to make short work of the newest Mustang and Camaro.

Steamroller72 wrote on July 8, 2016 - 2:18pm Permalink
Don't see the Challenger "shrinking" any time soon. At least I hope not! It's a perfect modern muscle car. That new 'Cuda looks like the direct competitor for the Camaro and Mustang. All 3 can have that Euro-poached round bubble design.