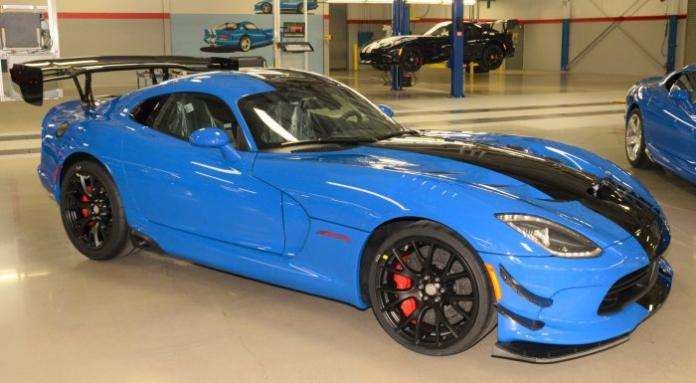 Thanks to a GoFundMe account started by a guy named Russ Oasis, the 2017 Dodge Viper ACR will be heading to the Nürburgring to see if what might be the last track-ready Dodge supercar has what it takes to reset the American performance car record at the world’s best known road course.
Advertisement

Back in September of 2011, a 2010 Dodge Viper SRT10 ACR piloted by Dominik Farnbacher lapped the 12.9 mile course in just 7:12.13 and other than the Gumpert Apollo Sport, no other road-going car had gotten around the famous road course in less time. Since then, the Lamborghini Huracán LP 640-4 Performante, the Porsche 918 Spyder, the Lamborghini Aventador SV, the Nissan GT-R Nismo and the Mercedes-AMG GT R have all jumped ahead of the Viper on the list of the quickest road cars around the Ring, but since the 5th generation Viper was introduced for the 2013 model year – followed up with the 2016 Viper ACR - Mopar fans have been calling for the new ACR to take a swing at the Nürburgring record.

The problem is that going over to the Nürburgring with a team aiming to make a record run is expensive and FCA doesn’t seem too keen on spending that money, especially with the Viper ACR setting 13 records around the US. That was where Russ Oasis came into play, as he spoke with folks from the Viper Exchange and he found that a new Nürburgring record run would cost around $156,000. With that in mind, Oasis opened a GoFundMe account to try to raise those funds and over the course of four months, remarkably, he has done it.

Relying only on donations, a pair of Dodge Viper ACR Extreme supercars from the Viper Exchange will be traveling with a team including experienced racers Dominik Farnbacher and Luca Stolz to Nurburg, Germany sometime in July to see if it can’t set yet another track record.

The New Viper Ring Record Run
When the pair of Dodge Viper ACR Extremes head over to the Nürburgring, the goal for Farnbacher and Stolz will be to turn a quicker time with the new ACR than the 7:12.13 turned in by the previous generation ACR. This new Viper is lighter and more powerful, it has better brakes, better suspension, better tires and, most importantly, a better aerodynamics package which should allow it to reach incredible speeds on the many sweeping turns of the Nürburgring – all of which should lead to a significantly quicker lap time.

While it seems likely that the team assembly by Oasis and the Viper Exchange will beat the time turned in by the 2010 Viper ACR, the biggest challenge comes in beating the European hypercars holding the spots above the previous Viper on the list of the top road car times. The Lamborghini Huracán LP 640-4 Performante’s record time is 20 seconds quicker than the 2010 Viper ACR, and it seems like cutting that much time is a tall order for the new ACR.

Realistically, even if this Viper team doesn’t beat the Lamborghini, anything in the 6-minute range will be an incredible feat and every second cut from the old Viper record of 7:12.13 is one more second below the best official time by a Chevrolet Corvette – which was a 7:19.63 run by the C6 ZR1 back in 2011.

We don’t know when Russ Oasis and his team will be heading to the Nürburgring, but you can be sure to find any information on this new record attempt here on TorqueNews.com.