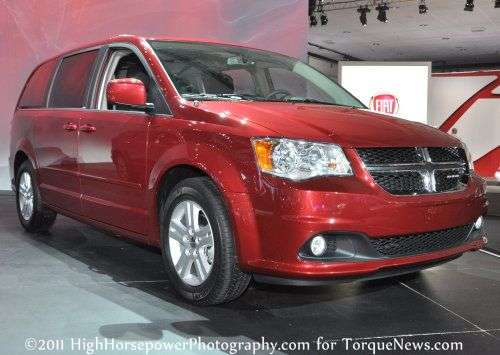 The Chrysler Group has offered up pricing of the mildly refreshed 2011 Dodge Grand Caravan and thanks to a reduction in price, the minivan that started the whole segment is now the least expensive minivan in the industry with a starting price of $23,995 for a comfortably equipped model.
Advertisement

The 2011 Dodge Grand Caravan is offered in five trimlines – Cargo Van, Express, Mainstreet, Crew, and R/T (the Man Van) – with the pricing beginning at just $21,800 for the stripped down Cargo Van models. This is a super bare-bones model intended more for commercial use with items like steel wheels, cloth low back bucket seats and “commercial wagon suspension” but most importantly, even this entry level commercial model comes with the 283 horsepower, 3.6L Pentastar V6. This is very comfortably the least expensive minivan in the industry although this stripped out model is not for everyone.

To get items like the 2nd row of seats and other luxury items, you have to step up to the 2011 Dodge Grand Caravan Express but with a price of just $23,995, it is still less expensive than any non-Dodge minivan on the market. Ford and General Motors no longer offer a minivan and while Toyota, Honda and Nissan all offer the family-friendly people movers, the cheapest of those three is the Toyota Sienna at $24,560 - $565 more expensive than the Grand Caravan Express.

In addition to being the least expensive minivans in the US market, the 2011 Dodge Grand Caravan is also the most powerful. The new 3.6L Pentastar V6 churns out 283 horsepower compared to the best engines from around the segment, with Honda offering just 248hp, Toyota with 266hp and the Nissan Quest offers only 260hp. Based on the available features, low price and higher power than the competition, there is no question why the 2011 Dodge Grand Caravan leads the market in sales through the first two months of 2011 with 18,368 units sold so far.

Chrysler head Sergio Marchionne has commented that one of the two minivan twins (the other being the Chrysler Town & Country) will likely get the axe over the next few years as the Chrysler Group works to help differentiate between any like models in the company portfolio, even if that means killing off one of the bestselling minivans in the history of the industry.