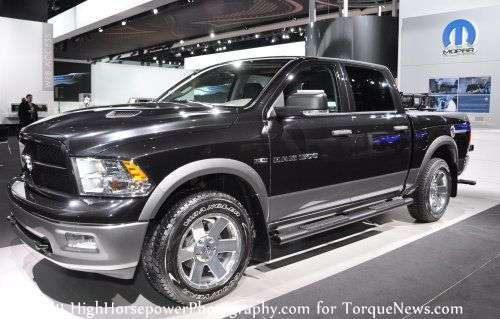 The numbers from around the US automotive industry are in and the Chrysler Group is the weakest of the American automakers in terms of year over year growth (comparing February 2010 to February 2011) and even with consumers seemingly waiting for the impressive new 2011 models to reach dealerships in higher numbers, Chrysler showed a jump of 13% in sales.
Advertisement

Dodge, Ram and Jeep all showed growth in February 2011, even though the Dodge Charger – one of the brands top sellers over the past few years – saw slow growth while prospective consumers wait for more 2011 models to reach dealerships these brands managed to see positive growth. Unfortunately, the same was not true of the Chrysler brand as every model except for the new Chrysler 200 saw year over year declines. Even with Chrysler struggling, the Chrysler Group managed to see a 13% gain from the second month of 2010.

The Ram brand was the strongest brand of the Chrysler Group in terms of growth and the brand was, as usual, lead by the model from which the brand got its name as the Ram pickup moved 18,644 vehicles for an improvement of 82% over last year. The vehicle formerly known as the Dodge Dakota was second in terms of sales with 1,650 trucks sold, a gain of 85% over last February. The Ram brand will likely continue to grow as Dodge has recently unveiled the Tradesman and Adventurer trimlines, each offering the popular 5.7L Hemi in a bare bones, low price package.

The Jeep brand was next in terms of growth, as the 2011 Jeep Grand Cherokee helped the Trail Rated brand to realize a 23% year over year gain. The Grand Cherokee moved 8,667 units last month for an improvement of 31% compared to February 2010, followed by the Wrangler with 7,636 sold and the Liberty with 5,896 sport utes sold. The Liberty was the strongest Jeep in terms of growth with a 61% gain over last year, followed by the Patriot with a 39% improvement and the Grand Cherokee at 31%. Jeep hopes to see things continue to improve as the popular Compass hits the market with the redesigned 2011 models, sporting a similar front end look to that found on the Grand Cherokee.

The Dodge brand was third in terms of growth but Dodge was the top of the hill from the Chrysler Group in terms of units sold. Their 33,561 cars, minivans and SUVs sold accounted for a gain of just 2% over last February but in a month where the brand saw a slight increase, the typically best-selling Charger sedan saw surprisingly low numbers. We can safely assume that this is due to consumers holding off until they can get the gorgeous new 2011 Charger of their dreams and with demand currently exceeding supply, some consumers are forced to wait. This caused the Charger to show a drop of almost 70% in sales as the numbers dropped from 10,363 in February 2010 to just 3,263 in February 2011. Considering the decline in Charger sales, the Grand Caravan was left to easily lead the brand in sales with 10,555 units sold.

With the exception of the now-discontinued Viper, every other Dodge brand vehicle saw a gain last month with the redesigned 2011 Dodge Durango showing a gain of 34,038% as the new sport ute moved 2,731 units compared to just 8 of them sold last year. The Dodge Caliber was the next best from Dodge in terms of growth with a 52% improvement and the mighty Dodge Challenger came in third in growth with a 50% jump in sales from last year. This allowed the Challenger to pull within 500 units of the Ford Mustang – the closest the Challenger has gotten to the Mustang since making its return to the industry.

The Chrysler brand pulled up the rear, as for the second month in a row the Chrysler Group’s luxury lineup saw a negative sales growth, this time of 25%. Like the Dodge Charger, the Chrysler 300 has received a sexy new form and a new engine option and it looks like consumers may be waiting until the 2011 models reach their local showrooms as the 300 plummeted by 71% compared to February 2010. Even vehicle in the lineup showed a decline in sales, including the brands top seller – the Town & Country minivan. Even though the T&C moved 7,904 units last month causing a 9% decline, it was the best of the brand. The Chrysler 200 was the one bright spot, with 2,319 D-segment sedans leaving the lots and with no 200 sold last year, there was no percentage growth (or loss). However, if you compare the number of Chrysler 200’s sold in February 2011 to the number of Chrysler Sebring’s sold in February 2010, the Sebring was technically more successful but like the 300, perhaps consumers are waiting to see more of these vehicles on the lot before pulling the trigger.