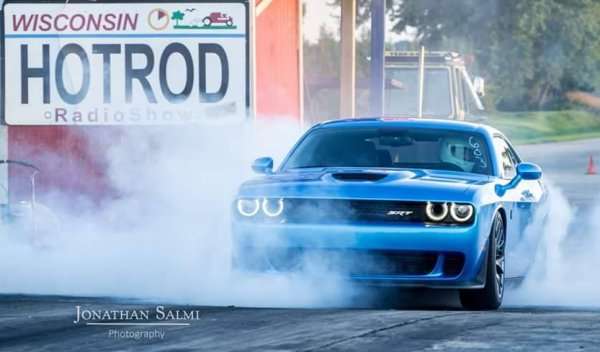 When the Dodge Challenger SRT Hellcat was introduced last year, it came with a certified quarter mile time of 10.80 with drag radial tires, but a handful of owners have found that when well driven – the Hellcat Challenger with good, sticky tires will run well into the 10.60-10.70 range.
Advertisement

Here at TorqueNews, we talk a great deal about the various quarter mile records laid down by privately owned Dodge Challengers and Chargers with the supercharged Hellcat Hemi. The vast majority of the cars that we have discussed recently have been modified for improved performance in some way – even if only with simple things like gears or a tune – so those cars aren’t a great depiction of what these Mopar muscle cars will do in stock form.

Since doing these various Hellcat drag racing pieces, I have received a few questions from readers asking about the best quarter mile times for cars with just sticky tires. Keep in mind, when the Hellcat Challenger was introduced, Dodge quoted an official quarter mile time of 11.20 with the stock tires and 10.80 with drag radial tires. However, several owners have beaten that 10.80 time and in hunting around the internet, it seems to me that the record for the quickest Hellcat Challenger with sticky tires is a 10.62, with two other cars close behind with a 10.70 and a 10.71.

Beating the Official Dodge Hellcat Time
I am fortunate to be involved in the Dodge Hellcat owner’s community, which allows me to keep close track of who has the quickest cars in the country. When it comes to a stock car with just sticky tires, I have spoken with two owners who beat that 10.80 time. It should be noted that all of these heavily-raced Hellcat cars have swapped to a stronger driveshaft. This isn’t a performance modification so much as it is a safety issue, as the stock driveshaft has proven to be a weak spot when the car is equipped with sticky tires.

The first is John Gaddy, who I believe holds the record for the quickest quarter mile time with a Hellcat Challenger or Charger with nothing more than sticky tires and the aforementioned driveshaft. John’s 2015 Hellcat Challenger ran a best time of 10.62 at 130.93 miles per hour with a Hoosier drag racing slick tire. If anyone has gone quicker than a 10.62 with nothing more than tires and a driveshaft, he or she hasn’t made their record known online.

Gaddy has since modified his Hellcat Challenger a bit, adding 3.09 gears and more power via a pulley swap and tune – allowing him to crack down into the 9-second range. However, in speaking with him, he believes that he would have been able to get into the 10.50s with just the tires and driveshaft, had he not been looking to get into the 9s.

In any case, with a run of 10.62, John Gaddy proved that with good tires and a good driver, the Hellcat Challenger will most certainly outrun the official 10.80 time.

Next, we have Ricci Cavallaro, whose 2015 Challenger has been featured here on TorqueNews in the past. With nothing more than a driveshaft and DOT approved drag radial tires, Ricci ran a best time of 10.71 and while some people might point out that the Dodge official time of 10.80 was with a drag radial tire (not a racing slick), Cavallaro’s best time is proof that a well driven Hellcat Challenger with street legal, drag radial tires will run quicker than 10.80.

Finally, John Gaddy knows another Hellcat Challenger owner with DOT approved drag radial tires and a driveshaft who has run a best time of 10.70, adding just one more piece of proof that with sticky tires – the Hellcat Challenger with the 8-speed automatic transmission can outrun the official Dodge time of 10.80.

Also, if you have a Dodge Challenger or Charger with the Hellcat Hemi and you feel like chasing a record, get yourself a stronger driveshaft and a good set of sticky tires and aim for the 10.50s. It seems possible, but no one has seemed to have done it – yet.