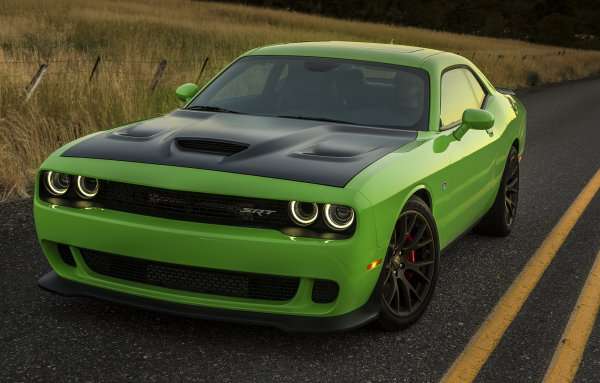 Those folks who ordered a 2015 Dodge Challenger SRT Hellcat with the Satin Black hood treatment have gotten some bad news, as an undisclosed issue with the black finished hood has caused the Chrysler Group to delay deliveries of the 707hp muscle car with that option back to February.
Advertisement

A few weeks back, as the first examples of the 2015 Dodge Challenger SRT Hellcat were reaching dealerships and owners around the country, I got a note from a TorqueNews reader who had gotten some bad news from his dealership. When checking with his dealership to find out when his Hellcat Challenger in Sublime Green with the Satin Black hood might be delivered, he was told that there was an issue with the Satin Black hood option and because of that issue – he could be waiting until at least February to get his new Mopar muscle car.

Shortly after that, more reports of this Hellcat Challenger delay due to the Satin Black hood began popping up on the various automotive forums and social networks. However, those reports all came from someone who had been speaking with their dealership, so this delay of Challengers with the Satin Black hood was far from official.

Unfortunately, the delay on the 2015 Dodge Challenger SRT Hellcat with the Satin Black hood has become official, although the actual date of arrival has not been confirmed.

Satin Black Hood Delayed
A Chrysler Group representative has confirmed that there is a delay in the Satin Black hood treatment for the 2015 Challenger Hellcat and because of that, those cars ordered with that option will be delayed until the black hoods become available. That is bad news for those buyers who preordered the 707hp Challenger and it kind of gets worse. There is no official point in time where the company expects for this delay to end. While dealerships have been telling people that the Hellcat Challengers with the Satin Black hoods should arrive in February, the Chrysler rep could not confirm that arrival time.

The good news – if you really want to call any part of this good news – is that 2015 Challenger Hellcat buyers can expedite the delivery of their new Mopar muscle car by agreeing to switch to a hood that is the same color as the rest of the car. That is only good news because it does give buyers some option to get their new car much sooner, but there is no question that the Hellcat Challenger looks even more incredible with the Satin Black hood so I am bummed to hear that we won’t be seeing them on the street for several months.

Then again, I am sure that I am nowhere near as bummed as the people who laid down $65k+ for a 2015 Dodge Challenger SRT Hellcat – only to learn that it could be months before they get their hands on the car.

Chris Glaubitz wrote on December 21, 2014 - 9:07am Permalink
Not sure why or how a satin black hood makes a difference for on time delivery of a new car.

Panasonic Updates Profit Forecast, Noting How Much Tesla Batteries Help The Jump
2022 Porsche 911 GT3 Laps Nurburgring in 7:04 With Journalist Behind The Wheel
END_OF_DOCUMENT_TOKEN_TO_BE_REPLACED