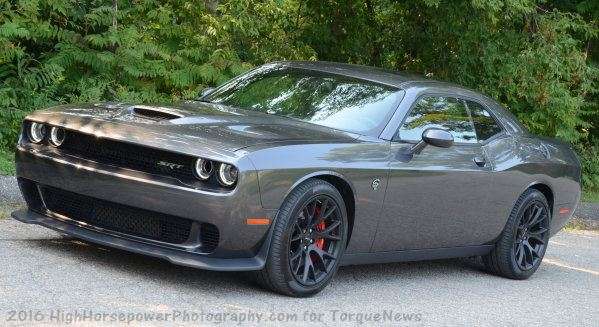 The Dodge Challenger Could Soon be Chrysler's Smallest Car - Seriously

Chrysler Group CEO Sergio Marchionne recently stated that the Dodge Dart and the Chrysler 200 are on their way out of the lineup and if that proves to be true, the Dodge Challenger will be the smallest car in the Chrysler Group core brands – which is a pretty outrageous thing to consider.
Advertisement

According to the folks at Allpar, Sergio Marchionne made comments earlier this week leading pretty much everyone to believe that both the Dodge Dart and the Chrysler 200 will be killed off as the company puts more focus on their ultra-popular trucks and SUVs. The Dodge Avenger is already dead and the Dodge Viper is on its way out, meaning that the smallest car from the current lineup to exist in the next few years is the Dodge Challenger.

The biggest of the American muscle cars could be the smallest car sold by the Chrysler Group brands, but it isn’t realistic to think that we won’t see something smaller than the Challenger from either the Chrysler brand or Dodge in the coming years.

The End of the Dart and 200
Although the Dodge Dart and Chrysler 200 have comfortably exceeded the sales of their predecessors, they have seemingly failed to meet the expectations of the Chrysler Group management. There were 177k+ 200s sold in 2015 and 87k+ Dodge Darts, making them the first and third bestselling cars in the entire company portfolio. The Ram pickup family, the Wrangler, the Grand Cherokee and the Cherokee all sold more than 177,000 units, but the Chrysler 200 was the bestselling car from the entire company. The only car that outsold the Dart was the Dodge Charger and while the Dart didn’t grow much from 2014, there was positive sales growth in 2015.

Based on those numbers, it is hard to imagine that the company would kill them off, even if those sporty sedans aren’t selling as well as the management would like. However, Sergio Marchionne has stated that these two cars will “run their course” as the company focuses more on trucks and sport utility vehicles. He also said that the company would turn to their partners to provide vehicles “from their facilities”, but it is hard at this point to imagine what that could mean. Most recently, Chrysler has worked with Mitsubishi for small car programs, but Mitsubishi’s small cars haven’t been doing all that well of late.

Basically, would Chrysler replace their bestselling car with a rebadged Mitsubishi?

Gas prices are forecasted to remain low through 2016 and with the Jeep sales booming towards new record numbers, so it makes sense for the company to focus on their bestselling products. However, with the midsized and compact sedan segments being the two biggest car classes in the US market – with the 200 serving as the company’s bestselling car – it seems unlikely that the company will truly run with the Challenger and a rebadged car from some other company.

Fortunately, the 200 and Dart had stronger years in 2015 and they are both fairly young vehicles, so running their course should take at least a few years – but it looks like the Dodge Challenger could be the smallest car from this era of the Chrysler Group core brands to carry on into the future.

That is a little bit crazy. Awesome, but crazy.