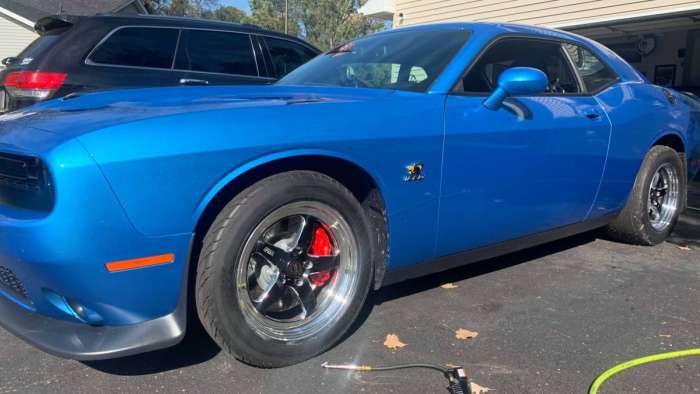 Kenzie Peterson has only been to the track three times, but she has already set a quarter mile world record with her 2019 Dodge Challenger R/T Scat Pack 1320.
Advertisement

When Dodge introduced the Challenger R/T Scat Pack 1320 package, the automaker announced that it was officially the quickest naturally aspirated production car to date, with an official quarter mile time of 11.7. That time was recorded with the stock Nexen drag radials, but as the team at Holmberg Motorsports has learned, good air, better tires and just a touch of weight reduction makes the 1320 Challenger considerably quicker.

In fact, this past weekend, Kenzie Peterson was able to set the quarter mile world record for the quickest Dodge Challenger 1320 to date, laying down a best elapsed time of 11.375 at 118.76 miles per hour. While that is impressive, what makes this record even more impressive is the fact that Peterson has only been racing three times, all in this car and all this season, yet she is clearly learning very quickly how to get down the track.

Peterson’s Story
In most cases, when we feature a driver who has set a world record, that person has been racing for many years, but in the case of this Challenger 1320 owner, she only started racing earlier this year. Her step-father, Tim Holmberg, has a 2018 Demon and has been an active drag racer for a long time, so when the 1320 was announced, Tim and Kenzie’s mother Laura asked her if she was interested in getting into drag racing. Her parents explained that if she was serious about learning the sport, they would buy the car and Tim would show her the ropes. She agreed and the beautiful B5 Blue Challenger shown here was added to the Holmberg Motorsports stable.

Due to Peterson’s work schedule, the 22-year old rookie racer hasn’t gotten as much seat time as she had hoped this season, but this past weekend, she had time to make her third trip to the drag strip and the result was a world record. Best of all, this new racer ran these incredible numbers in bracket racing eliminations, so she had the added stress of actually competing with the vehicle in the other lane, but that didn’t stop her from turning out some awesome numbers.

She ended up losing in the second round, as she was in an 11.50 class and ran an 11.45, but that 11.45 showed that her 11.37 in time trials was no fluke and with only three trips to the track under her belt, Peterson has run the quickest quarter mile time of anyone in a new Challenger 1320. For those wondering, the record-setting run was made at Rock Falls Raceway and at the time of the run, the local density altitude was just over 1,000 feet.

Record-Setting Challenger 1320
Before getting into the record run, we wanted to quickly touch on the short list of modifications made to this Dodge Challenger 1320. As you know, the 1320 package comes from the factory with lightweight wheels and drag radials, but Holmberg swapped those wheels and tires out for front wheels that weight less and rear tires that grip a whole lot better. In addition to the skinny wheels and tires up front, this Challenger has Mickey Thompson ET Street R drag radials out back, which are regarded as some of the best drag radials on the market today.

On the inside, this Challenger 1320 features the basic one-seat layout and in addition to the wheels and tires, the only other upgrade from stock is the lightweight battery from Darrel Cox Racing. Thanks to the wheels, tires and battery, this 485-horsepower Mopar muscle car weighed just 3,960 pounds without the driver, but literally everything else about this Challenger is factory-stock. The engine is original from the air filter to the exhaust tips and the rest of the drivetrain is untouched, but with new wheels, tires and a battery, this Dodge ran considerably quicker than the official time used for marketing purposes.

It should be noted that as Peterson is learning the car and the sport, she is not using the 1320’s TransBrake feature, as it can be tricky, but that clearly isn’t slowing her down any.

In the first video below, Peterson is racing against a fifth-generation Chevrolet Camaro. The Chevy gets off of the line first with better reaction time, but the Challenger 1320 quickly runs it down and races off into the sunset, running an 11.375 at 118.76 miles per hour. On this run, she pulled a 1.622 60-foot time, showing how hard the Hemi-powered muscle car is leaving the line, getting out of the hole as quickly as many Hellcat cars.

In the second video, Peterson is bracket racing with a motorcycle, which is slower than her 1320, so the bike gets a head start. The Challenger quickly catches and passes the motorcycle, but Peterson runs an 11.45 on her 11.50 dial, which leads to disqualification for running under her time. However, the day as a whole was a huge success, as on just her third time racing and her third time in this 1320 on the track, she ran a quicker quarter-mile than any other 1320 owner in the world.