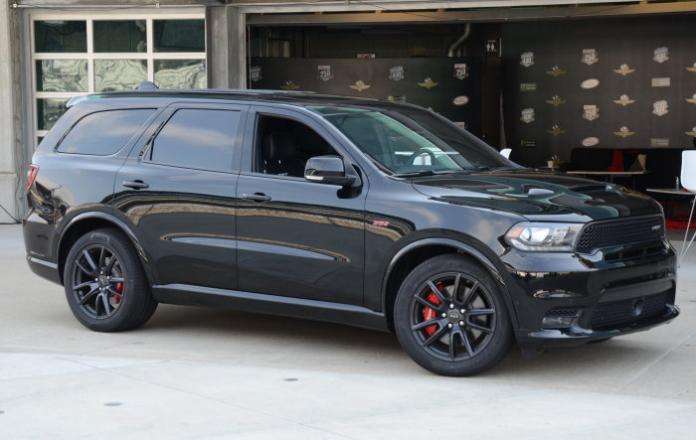 We have already brought you the basic pricing model for the 2018 Dodge Durango SRT but today, we bring you a detailed look at the option pricing for the 475hp SUV – which you can order from your local Dodge dealership right now with the first units arriving this fall.
Advertisement

Earlier this month, we learned that the 2018 Dodge Durango SRT will have a base MSRP of $62,995 or $64,090 with the destination fee of $1,995. That makes the Durango SRT $3,900 less expensive than the similarly-powered SRT Jeep based on the basic MSRP, but we didn’t get any of the option pricing for the high performance Dodge SUV.

Fortunately, the detailed pricing information for the 2018 Durango SRT showed up in my email inbox this morning (thank you to the mysterious individual who sent that over), so here is a closer look at the full pricing for the newest Dodge SRT vehicle.

Exterior Paint Options in the Dealer System as of 7/25/17:
Billet Metallic
Bruiser Grey
Black Crystal
Granite Metallic
Octane Red
White Knuckle
(All colors above are available without any upcharge. It should be noted that the original Durango SRT press release also stated that the package would be available in an assortment of other colors including Blu by Yu, Ocean Blue, Redline, Sangria and Vice White, but since those colors aren't mentioned, I suspect that they are late availability colors which are not currently in the dealer computer system.)

Loaded Durango SRT Pricing
In base form, the 2018 Durango SRT has a starting price of $64,090 with destination, but if we add in every option listed above, the price tops out at $76,930. However, the option list has a bunch of things that someone buying the Durango SRT to go fast likely wont want, so if we only focus on the components which really add to the sportiness of the high performance SUV (Laguna Leather, SRT interior appearance, the black wheels, the 3-season tires, the sunroof and the trailer tow group), the price sits at $70,565. Also, if you don’t want the sunroof, you can get into a nicely appointed SRT Durango for under $70k.

Order Your SRT Durango Now
In speaking with a few of my dealership connections, I have learned that the order bank for the 2018 Dodge Durango SRT is open now, so if you are planning to buy one of the 475hp Dodge SUVs and you would like to get it as soon as possible – you will want to make a trip to your neighborhood Dodge dealership soon to talk about placing an order. We dont know exactly when deliveries will begin, but they are likely to begin reaching dealerships during the 4th quarter of 2017.