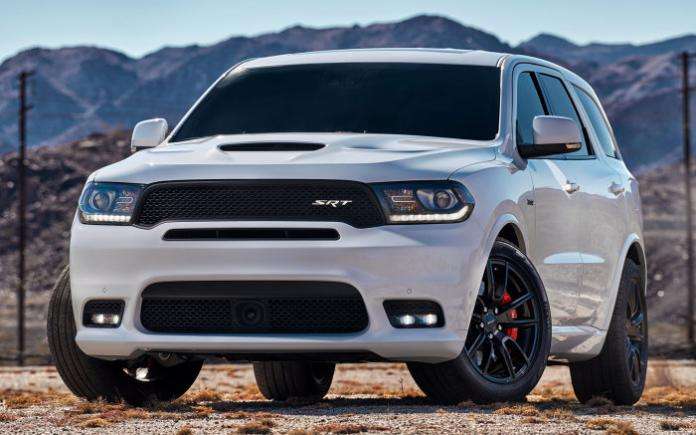 FCA has announced the pricing for the 2018 Dodge Durango SRT and with an MSRP starting at $62,995 (not including destination), the 3-row SRT SUV is $3,900 less than the Jeep Grand Cherokee SRT – while also offering a towing capacity 1,500 pounds higher than the Jeep.
Advertisement

The 2018 Dodge Durango SRT made its grand introduction at the 2017 Chicago Auto Show with the 392 cubic inch Hemi packing 475 horsepower, 12-second quarter mile capabilities and the ability to tow 8,600lbs – making it one of the strongest SUVs in the class while also being one of the quickest. More importantly (to some buyers), the Durango SRT includes a 3rd row of seats, which is the most attractive advantage of the SRT Dodge SUV over the SRT Jeep for many shoppers. The Durango is also far more capable in terms of towing, with an estimated capacity of 8,600lbs while the SRT Jeep can “only” tow 7,200lbs, so while that wont apply to as many prospective buyers as the extra seating space, the SRT Durango offers some key advantages over the Jeep Grand Cherokee SRT.

We learned today that the 2018 Dodge Durango SRT will have one other big advantage over the SRT Jeep – an MSRP starting nearly $4,000 lower.

“The new 2018 Dodge Durango SRT is America’s fastest, most powerful and most capable three-row SUV,” said Tim Kuniskis, Head of Passenger Cars Brands, Dodge, SRT, Chrysler and FIAT – FCA North America. “This is what you get, when you take everything great about the Durango and combine it with the performance of the Charger SRT: a 12-second quarter mile, 8,700-lb.-toy hauling, three-row muscle car.”

2018 Dodge Durango SRT Pricing
The 2018 Dodge Durango SRT has an MSRP starting at $62,995, which rises to $64,090 when you factor in the unavoidable destination fee. That price includes all of the premium features that you would expect on the inside, including heated/cooler leather front seats, heated second row seats, a flat bottom SRT steering wheel with audio controls and shift paddles, the newest UConnect infotainment system and a premium sound system. On the outside, the Durango SRT features huge Brembo brakes in the front and rear, 20x10” wheels wrapped in Pirelli 295/45ZR20 Scorpion Verde all-season tires or optional Pirelli P Zero three-season tires, the vented SRT hood and an aggressive front fascia.

Finally, the 392 cubic inch Hemi sends 475hp and 470lb-ft of torque through the high performance 8-speed automatic transmission and the heavy duty all-wheel drive system allowing the Durango SRT to dash from 0-60 in just 4.4 seconds while running the quarter mile in an NHRA-certified time of 12.9 seconds. Also, the Bilstein adjustable high performance suspension system works with the big Brembo braking package to help this big SUV corner as well as it accelerates.

For those wondering, that starting price of $62,995 is $3,900 less than the Jeep Grand Cherokee SRT, which starts at $66,895 before destination fees. The Durango shares a similar drivetrain, braking system, suspension system and interior technology to the SRT Jeep, but as is the case with the other trimlines, the Dodge starts well below the Jeep even though the Dodge offers more seating space.

We don’t know exactly when the 2018 Dodge Durango SRT will go on sale, but we do know that the company plans to get these high performance SUVs in dealerships around the US during the 4th quarter of 2017, so the order banks will likely open later in the 3rd quarter or early in the 4th quarter.