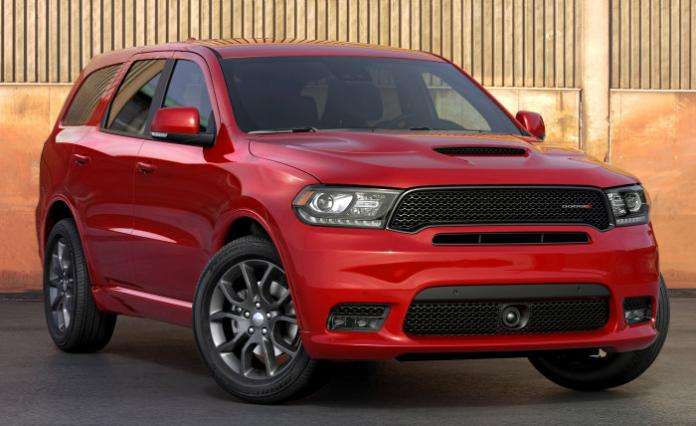 Dodge has announced that the exterior styling of the new Durango SRT will be available on lower performance models and while some people hate the idea of the high performance look on the non-performance models. I think that this move comes at the perfect time.
Advertisement

However, Dodge has timed the launch of the Durango SRT and the introduction of the SRT-inspired styling for the lower performance models in a way that should prevent anyone from getting their feelings hurt.

SRT Styling for the RT and GT
The 2018 Dodge Durango SRT comes with a vented performance hood with an integrated hood scoop and an aggressive front fascia, both of which bolster engine cooling air flow and overall aerodynamics while making for one mean looking SUV. That same front fascia and hood will also be standard equipment on the 2018 Dodge Durango R/T with the 360hp/390tq 5.7L Hemi and, like the Durango SRT, the sportier Durango R/T is available in B5 Blue.

Also, those buyers opting for the 2018 Dodge Durango GT with the 3.6L Pentastar V6 can add the SRT performance hood when they equip their vehicle with either the Blacktop Appearance Package or the Brass Monkey Appearance Package.

“Performance is more than stats, at Dodge performance is an attitude that permeates through everything we do,” said Tim Kuniskis, Head of Passenger Car Brands – Dodge, SRT, Chrysler and FIAT, FCA – North America. “And new for 2018, Durango buyers can get SRT attitude with every Durango powertrain – from the 295 horsepower 3.6-liter Pentastar V-6 to the 360 horsepower 5.7-liter HEMI V-8 to the new 475 horsepower 6.4-liter SRT – strengthening the brand’s promise to deliver performance vehicles with world-class power, technology and standout styling our customers have come to expect.”

Shared Styling, not a Downstream Shift
While some people are going to gripe about Dodge’s decision to offer SRT styling on the V6 GT and the 5.7L R/T models, this rollout along with the Durango SRT should prevent any of that.

With the timing of the SRT Durango arriving for 2018 along with the similarly styled 2018 Durango R/T, buyers who want a sporty V8 SUV will be able to choose from two different models. Those folks who want to pay more for improved performance can pick the 485 horsepower SRT model while those buyers who don’t need quite as much power can get the same aggressive look from the 360hp R/T model.

Rather than a situation where they have a premium model with a unique exterior design one year, only to begin offering that no-longer-unique look on other models in following years, Dodge has rolled out the Durango SRT alongside the Durango R/T with the same look. SRT buyers go into the situation knowing that their look is not SRT-only, so there shouldn’t be any complaints about the styling being shared across multiple models. This isn’t a downstream shift in premium styling – it is two vehicles released around the same time with the same look and buyers just have to pick their desired performance level.

Ultimately, the Dodge execs know that the people who want the Durango SRT want it for the high performance capabilities, but they also know that Durango R/T buyers would like a more aggressive exterior design. Offering the same basic front end design on both vehicles isn’t going to deter people who want 485hp from buying the SRT model, but this sharper looing front end could make the 360hp Durango R/T even more enticing to someone who doesn’t want the power or price of the SRT model. Of course, people will still complain about the SRT models not having a unique look, but with this parallel rollout - SRT buyers cant complain about being surprised to see similar-looking models with smaller engines.

In the end, the styling of the 2018 Durango SRT is gorgeous, so there is nothing to complain about in seeing even more new models with that similar look.