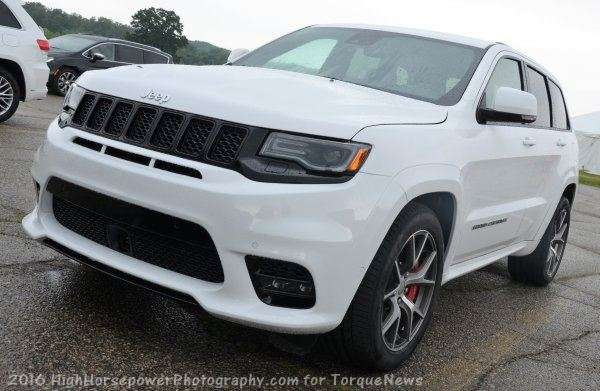 After all sorts of speculation over spy shots over the past few months, the 2017 Jeep Grand Cherokee SRT is here and as you can tell from the image above showing a new SRT Jeep, the spy photos all over the internet insisting that this is the 707hp Hellcat model are incorrect – although this new Jeep is a whole lot sportier up front.
Advertisement

It is all but guaranteed that in the next year or so, we are going to see a Hellcat Hemi-powered Jeep Grand Cherokee and when a Jeep test vehicles looking like the one above started showing up on local roads – spy photographers and uninformed media outlets were quick to insist that this was the Hellcat Jeep. It is not and I know that because right after I took the picture shown above, I got into this Jeep and drove it around the Chrysler Proving Grounds. It is a wicked-fast SRT Jeep with 475hp and 470lb-ft of torque, but it is a far cry from a Hellcat model.

Really, the 2017 Jeep Grand Cherokee SRT hasn’t changed all that much, but the aggressive new front end and the choice of three different wheel packages keep the ultra-quick SUV fresh. More importantly, I expect that the face of the new SRT Jeep previews the Hellcat Grand Cherokee that should arrive sometime next year…although that is purely speculative. The key note here is that in the 2017 information, there is no mention of a Hellcat engine in the Jeep, or the world Trackhawk.

The 2017 SRT Jeep
As we have been seeing over the past few months, the 2017 Jeep Grand Cherokee SRT has a redesigned front fascia, a new grille design, new fog lights and a far deeper-reaching fascia design along the front end of the 475hp SUV. While the upper grille between the LED-trimmed headlights is smaller, the addition grille vent in the middle of the fascia and the massive lower grille opening will allow plenty of cooling air to enter the engine bay. Also, the fog light bezels have areas above and below the lighting elements that could certainly serve to cool the brakes or additional cooling system components.

On the outside, the SRT Jeep will have three different wheel options and on the inside, the SRT Jeep gets a new Laguna Leather interior package. However, the biggest change is the front end and I like the aggressive new design much more than the outgoing models. I am a fan of the current (2016) SRT Jeep, but the front fascia of the 2017 look adds a whole new level of high performance appearance.

More importantly, while there is no mention of a Hellcat model, I believe that this 2017 Jeep SRT front end has all sorts of additional air flow in preparation for the Hellcat model. That huge lower grille is similar to the current Hellcat Charger and since the current 392 cubic inch Hemi has no issue staying cool with the 2016 front end, there has to be some other reason for the increased air flow. In my opinion, the Hellcat Jeep will have this front fascia, but it will have a different hood from the one shown above. Again, this Hellcat talk is purely speculation, but I expect that when the Hellcat models arrive – I will have made a good guess on the design styling.(More on Page 2)

This new Jeep front end is certainly designed to aid engine cooling, but I wouldn’t be surprised if this fascia offered better aerodynamic properties in high speed conditions. You know, like when you are going 200mph in a 707hp SUV.

So, no Hellcat Jeep for now, but we know now that the restyled Jeep Grand Cherokee test vehicles captured by spy photographers are simply the 2017 SRT Jeep with the 392 cubic inch engine.