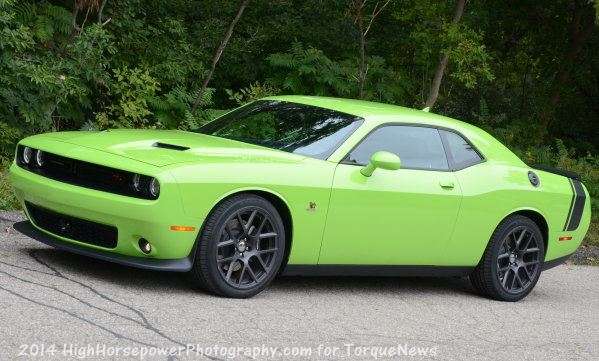 The Chrysler Group is amidst a very stupid lawsuit over the use of the Scat Pack name on the 2015 Dodge Challenger and with the Challenger T/A looking so awesome at SEMA, I have to wonder if perhaps the T/A name could replace the Scat Pack trimline –which would alleviate the legal matter while injecting even more retro feel.
Advertisement

The Dodge Challenger T/A Concept debuted last month at the 2014 SEMA Show with many of the attributes of the production Scat Pack Challenger. The Challenger T/A looked great and it looked very much like a car that could transition smoothly from concept to production. The only “problem” is that the T/A is not all that different from the Scat Pack so it would be hard to sell the two side by side. Then I got to thinking…what if the Challenger T/A is set to replace the Scat Pack?

Legal Battle Over the Scat Pack Name
In case you haven’t heard, the Chrysler Group is involved in a legal battle over the use of the Scat Pack name that actually dates back to the original Dodge Scat Pack cars back in the 1960s. A company that makes crankshafts under the name Scat Enterprises is suing Chrysler for using the Scat Pack name, claiming that the trimline is a violation of their trademark on the word “scat”. Considering that scat is an English word, this trademark battle seems like little more than a desperate publicity stunt for the crankshaft company, one that will hopefully make Mopar fans think twice before buying products from that company.

The interior of the Challenger T/A Concept is where a production model would likely differ the most, as the fitment of the Viper seats, the harness bar and the rear seat delete both seem a bit too extreme for a production road model.

Finally, the Challenger T/A sported a unique induction system that was based on the undercarriage of the production Shaker hood setup. While this induction setup is very cool, it is not necessary for this car to rock, so a normal induction setup with this design offered as an option would make good sense for a production car.

Scat Pack Future
Comments from the Chrysler Group pertaining to this nonsensical legal battle indicate that the automaker plans to defend its right to use the Scat Pack name on the 2015 Dodge Challenger and other programs (including the Charger Scat Pack). Based on that, it seems unlikely that the company will quickly remove the already popular Scat Pack trimline, but the possibility of a production Challenger T/A seems like a great backup plan in case the company wants to put this absurd trademark battle behind them.

Click here for a detailed look at the Dodge Challenger T/A Concept.

Wayne wrote on December 2, 2014 - 3:34pm Permalink
They are not very bright! As the popularity of the challenger grows they would get free advertising and a Google search would would always bring up their name also. Whatever tho, Besides the fact that scat is just a word and I don't know how anyone can own a word. I would never want to do business with a company that sue over something as silly as that. Goes to their character and their credibility as far as intelligence. But I also like T/A Challenger better!