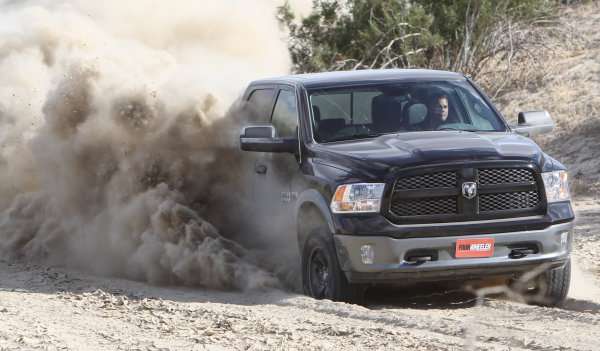 The Chrysler Group has issued a voluntary recall of select Dodge Charger, Chrysler 300 and Ram 1500 pickups over a concern that a component of the drivetrain may have not been manufactured properly and should this component fail – the vehicle could become inoperable.
Advertisement

This new voluntary Chrysler Group recall pertains to a very specific collection of vehicles with all of the affected Dodge Charger, Chrysler 300 and Ram 1500 pickups being equipped with all wheel drive (sedans) or four wheel drive (trucks), the new 8-speed automatic transmission and the 3.6L Pentastar V6. In 5,663 of the vehicles with the drivetrain specifications listed above, the transmission output shaft was produced with a two stage forging method. During internet testing, the Chrysler Group learned that these output shafts made with the two stage forming process may be subject to cracking and failing in “rare circumstances”. Once the output shaft from the transmission fails, the vehicle would not have any way of sending power from the engine to the wheels so the Chargers, 300s and Rams included in this recall could be undrivable should this component fail. Having the vehicle suddenly become unable to move under its own power presents a variety of risks including the driver being stranded somewhere or suddenly being without power in fast moving traffic.

Fortunately, the company is unaware of any accidents or injuries stemming from this problem and the output shaft in these Dodge Chargers, Chrysler 300s and Ram 1500 pickups was changed to a single stage forging process shortly after production began. This means that the 5,663 units affected by this new recall were early-run 2013 model year vehicles and those sold later on and into the 2014 model year should not be affected by the same problem.

The Chrysler Group hasn’t offered a breakdown by model but we do know that of the 5,663 vehicles included in this recall, 4,194 are in the United States, 1,424 are in Canada and the other 45 are outside of North America. The company will begin contacting owners soon (no notification schedule has been announced), asking them to return to their local dealership where the transmission output shaft will be inspected and – if necessary – the dealership will replace the troublesome component. Owners of the 2013 Dodge Charger, Chrysler 300 or Ram 1500 with all wheel drive, the 3.6L Pentastar V6 and the new 8-speed automatic transmission can contact Chrysler for more information at 1-800-853-1403.

Even with the output shaft being formed during the problematic two stage forging method, it should take a fair amount of abuse to stress the component enough to break and leave the affected Charger, 300 and Ram 1500 models without power to the wheels. It is likely that the rare circumstances in which Chrysler found these output shafts failing came during extreme levels of testing so while failure under normal circumstances is very unlikely – there is no telling how much abuse the average owner will put their car or truck through so the Chrysler Group is making the right decision in getting these vehicles back to dealerships for repairs. In the long run, this recall pertains to a problem that is more of a headache than a safety issue but if the output shaft was to somehow fail at speed – there is some risk to the occupants of the vehicle and those in vehicles around the affected Charger, 300 or Ram 1500.