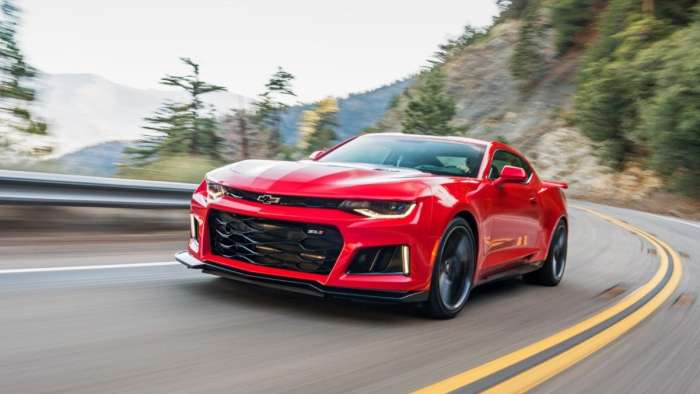 The future of the Camaro is in jeopardy, but if General Motors really plans to shelf the nameplate after the current generation, Chevy fans deserve a super-muscle car to end the era.
Advertisement

Last week, that same outlet reported that the Z28 version of the current Camaro had been cancelled, so those Chevy fans hoping to see the current generation go out with a bang had their hopes dashed. According to Muscle Cars and Trucks, the sixth generation Camaro Z28 was supposed to be powered by a new LT3 engine, displacing 6.6-liters of high-revving, naturally aspirated American V8. The LT3 would be like a modern take on the LS7 that powered the fifth generation Z28, but it seems that the program is dead before it ever saw the light of day.

While these reports could all be true - the Camaro could be a few years from leaving the lineup and there is no new Z28 coming with a new LT3 for the current generation – Chevrolet owes it to their fans to end this era with one, great muscle car. Rather than a unique engine, this car should be powered by the LT5 from the new Corvette ZR1, giving Camaro fans a proper competitor to the likes of the new GT500 Mustang and the Dodge Challenger Hellcat.

The Last Great Camaro
Let’s suppose for a second that the current (sixth) generation of the Camaro comes to an end after the 2023 model year, similar to when the model was shelved back in 2002. If the current Camaro drives off into the sunset, it could be years before we see another Chevrolet muscle car, if the model returns at all. We have been hearing rumors for years of the end of performance cars and the end of the V8 engine, so when you couple those rumors with the poor Camaro sales, it is feasible that the company could discontinue the model. I have a hard time imagining that it would be gone forever, but again, let’s just imagine that.

That would mean that the current Camaro could be the last Camaro, and if there is even a faint possibility that the 2023 Camaro will be the last, Chevrolet owes it to brand enthusiasts, muscle car lovers and American performance car fans in general to make sure that the last Camaro is the absolute best Camaro.

The current car has already proven itself as one of the best-handling American muscle cars ever, but with “just” 640 horsepower, it is well-behind the Mustang and Challenger. Fortunately, Chevrolet has the LT5 from the Corvette ZR1 with 755 horsepower and 715 lb-ft of torque. That powerful engine in the relatively lightweight Camaro would likely make this Chevy quicker and faster than the new GT500 Mustang with 760 horsepower and far less torque.

Really, the engine would be the focus of the package and there is no question that people would rush out to buy a Camaro with 755 horsepower, but this car could be more than just a dyno warrior. Add in the aero bits of the ZL1 1LE package, a set of Michelin Pilot Sport Cup 2 tires over carbon ceramic brakes and Chevrolet would likely end the Camaro with one of the greatest all-around muscle cars of all time.

Such a powerful machine would be a fitting car to wear the Z28 name, but the bottom line here is that if Chevy might kill the Camaro, the automotive world deserves one final, mind-blowing muscle car with LT5 power.

Dean wrote on July 8, 2019 - 2:14pm Permalink
I think GM is killing the Camaro and blending brand design into the new Blazer and C8 Corvette. Yep, that’s some bean counter non car enthusiast committee based decisions right there.
Dustin Munro wrote on July 8, 2019 - 7:31pm Permalink
General Motors should not discontinue the Camaro.What should be done is make a new Camaro as a cheaper,everyday use 4 seat version of the Corvette!
Jesse wrote on July 8, 2019 - 9:51pm Permalink
The pony cars of the 60's were exciting because it was a different time. Those cars were the original bad boys with attitude. They reflected the thinking of the 60's. Today's Camaro, Challenger, and Mustang are like a "tribute band" singing the original songs but it ain't the original band singing. The cars today reflect advancements in safety, mpg, emissions, and creature comforts, especially the electronics. Most drivers want those things. But for me, no CVT, turbo engine, stop/start engine feature or self-driving car. To put a point on this pencil, how many people know how to drive a stick shift? Or change a tire? OH.....I do....I do!!!
DeanMcManis wrote on July 9, 2019 - 2:49pm Permalink
I totally understand your point of putting the 755HP LT5 into the Camaro, as it would bring attention back to the whole Camaro line, provide a worthy adversary to the Challenger Hellcat Redeye/Shelby GT500 super rivals, and bring a balanced order back to the universe. But I am not sure that it will happen, and if it does then most likely the LT5 Camaro will be introduced in 2023 because GM has the bad habit of offering the best version of a car just before killing it off. The reality of the situation is that Chevy is most active right now in supporting their best selling Silverado, and getting the most attention heaped on their upcoming new C8 Corvette as possible. Honestly, even though the thought of a 750HP factory Camaro is truly exciting (as would be the various face-off, road/track tests of the new super ponycars) I think that a better approach will be to build the rumored 545HP, hybrid V8, AWD, Camaro that was actively rumored by Chevy a few months ago. Even better yet, build them both, and toss in a Volt-drivetrain PHEV Camaro model as well to really shake things up!
Drgeorgio Matteo wrote on February 6, 2021 - 8:19pm Permalink
Chevy should not only have a Lt5 Camaro to challenge the hellcat but also Lt5 powered impala ss to challenge the charger make it resemble the 1966 impala as with the 427