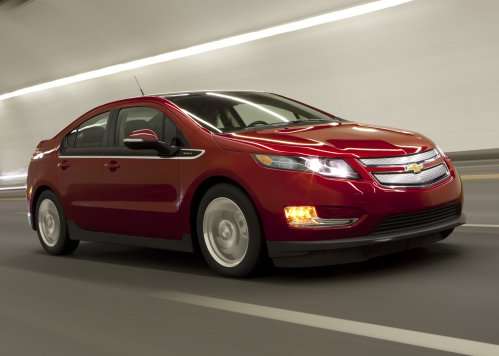 General Motors expected that when the new electric powered Chevrolet Volt began hitting dealerships around the country, it would attract new buyers and as the Volt hits more and more regions of the US – dealerships are reporting that this innovative electric sedan is indeed bringing in new faces the their dealerships.
Advertisement

Alan Starling, owner of Starling Chevrolet in St. Cloud, Florida told GM that even though they have been in business for “a long time”, having the Chevrolet Volt on the lot has brought in new faces. GM even went so far as to poll the current owners of new Chevy Volts, asking them how long it had been since they had visited a Chevrolet dealership. More than half of them told GM that they hadn’t been in a Chevy dealership in more than ten years and a third of Volt owners had never visited a Chevy dealership prior to showing their interest in their new Volt – proof positive that the Volt is not just offering current customers a chance to save at the pumps but it is also attracting new faces that wouldn’t have previously considered Chevrolet.

While the Chevrolet Volt has been slow to sell compared to the all-electric Nissan Leaf, General Motors reports that the Volt is helping the company in more ways than just basic sales units. GM has found that many prospective Volt-buyers are considering the Volt but they are also considering the far less expensive Chevy Cruze – which offers impressive fuel economy numbers at a significant difference in price compared to its electric sibling. While the Volt can offer a range of roughly 35 miles of gasoline free driving for an eMPG of 93 miles per gallon – numbers that are ideal for those who do mostly city driving – the 37mpg of the Volt when not on electric power may not be so appealing to some consumers. However, with the Chevy Cruze Eco offering 42mpg on the highway and a price tag well below that of the Volt – some who begin by intending to buy a new Chevy Volt are instead going with the cost effective Chevy Cruze.

However, as the Detroit Hamtramck plant where the Chevy Volt is produced has returned from a planned month long downtime for a model year change and retooling before the workers begin ramping up to a production of 150 Volts per day, four days a week. Once the company gets more Volts into showrooms around the country while pumping out the new electric vehicle with a range extending gasoline engine at the rate of 2400 a month, Chevrolet should stand a much better chance of keeping up with the far cheaper Nissan Leaf.

Soapy Johnson wrote on August 31, 2011 - 6:04pm Permalink
Sales have failed to rebound and demand has been non-existent since February's Chevrolet Volt 400 disaster ... http://placeitonluckydan.com/2011/05/nascar-pulls-plug-on-chevrolet-volt-400/
theflew wrote on September 1, 2011 - 11:52am Permalink
Sales are not the problem - production was. Given GM is either making very little or no money on these cars it makes zero sense for them to build more than the current market will tolerate. Nissan has reduce their target for the year and GM has increased theres. By January GM plans on production about 5k a month. To meet their target for calendar year 2011 they have to build on average ~ 2k a month until the end of this year. If they meet those targets then they are selling pretty good.
theflew wrote on September 1, 2011 - 11:44am Permalink
I think if you look at the yearly targets for Nissan and GM they would have sold about the same amount of cars in the US. GM has actually raised their number, so I would expect by the end of the year more Volts than Leafs sold.
Bobalouie wrote on September 1, 2011 - 4:54pm Permalink
"the Chevrolet Volt has been slow to sell". Huh? This is misleading. Selling all you can of a lower production volume car make does NOT equal "slow to sell". Many buyers (like me) had to travel out of state to find one available for sale. Until now, they were only available in 7 states, and even then dealers only had a limited allotment. The average time for a Volt on a dealers lot was 1 week. GM sold all they made, they just did not make as many as there was market demand. Why would they do that? Because they are following a slow production ramp up schedule to ensure the highest quality on a radically new vehicle. After building the first 4000, they shut down the production line for a month to upgrade it for higher production levels. Again, preplanned and pre-announced. The wisdom of this slow ramp up approach is born out by Volt customer satisfaction surveys. The Volt has the highest owner satisfaction rating of any new car according to JD Powers. A whopping 93% very satisfied or satisfied, way ahead of any other new car. My Volt delivered 250 MPG for last month's 1200 miles, and this is the best car I have ever owned.