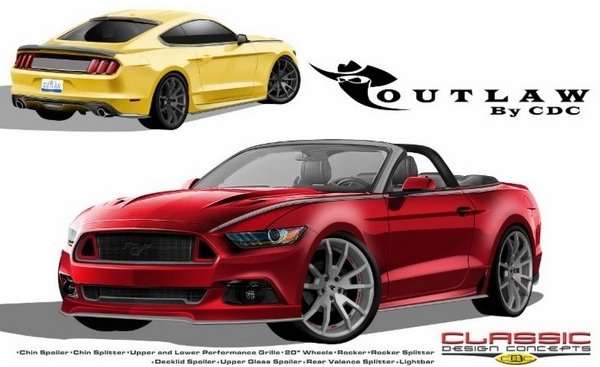 The 2015 Ford Mustang will almost surely be the belle of the ball for the 2014 SEMA Show and the latest next gen pony car teaser comes from the folks at Classic Design Concepts, who will be showing off two versions of their new Outlaw package for the 2015 Mustang in Vegas – one of which will be on display in the official Ford Motor Company area.
Advertisement

Classic Design Concepts of Wixom Michigan is one of the premier names in the world of Mustang modification so it comes as no surprise that CDC will be among the companies using the 2015 Ford Mustang to show off their latest and greatest items at the 2014 SEMA Show. The projects from CDC at SEMA will include a red 2015 Mustang convertible in the Ford Motor Company area while a yellow Mustang coupe will debut in the Classic Design Concepts booth. Both of these modified Mustangs will wear the new Outlaw by CDC package along with some other goodies that are available on the Classic Design Concepts Outlaw package, but they are not standard components.

Every 2015 Ford Mustang Outlaw by CDC sports a chin spoiler with a lower splitter, a unique upper and lower grille design, functional rocker sills with splitters, a unique rear spoiler, an Outlaw graphics package and 20 inch Flow Form forged wheels. On the convertible, a low profile rear spoiler is standard while Mustang Outlaw coupe buyers get a higher riding spoiler. Also, convertible owners get a light bar that runs behind the front seats.

The 2015 Ford Mustang Outlaw package will be serialized and can be purchased through CDC distributors and select Ford dealers, beginning in the first quarter of 2015.

Mustang Outlaw Add-Ons
In addition to those components listed above that come standard on the 2015 Ford Mustang Outlaw by CDC, buyers can pick from a short list of other items that can make the 2015 Mustang a whole lot better in every performance metric. If you want more power, you can add a high performance exhaust system or a Ford Racing supercharger package and if you want to make the most of that extra power, you can add on Ford Racing axle shafts. If you want your Outlaw Mustang to brake and handle better, CDC offers Wilwood brakes and a Steeda lowering spring package while those folks who want more interior wow factor can add a Kicker Car Audio components and leather interior accents.

Wheels for Camaro and Challenger Owners
While the 2015 Ford Mustang will obviously be the focus of CDC’s attention at SEMA, those Chevrolet Camaro and Dodge Challenger owners who love the look of these 20 inch Outlaw wheels are in luck – as CDC sells these wheels for the 2010-2014 Camaro and the 2008-2014 Challenger. Also, owners of 2005-2014 Ford Mustangs can also opt for these lightweight, high strength aluminum wheels without getting the entire Outlaw package.