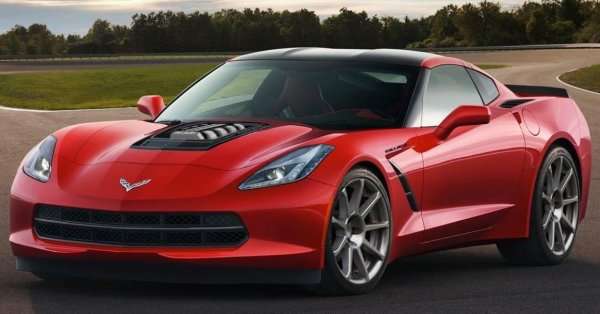 Back in August the people at Callaway Engineering offered a teaser of their take on the 2014 Chevrolet Corvette Stingray and today we have a closer look at the C7 Callaway Corvette along with the specs that will allow this new aftermarket package to (almost) keep up with the new Corvette Z06.
Advertisement

The exterior appointments of the 2014 Callaway SC610 Corvette Stingray are minimal but they are impossible to miss with an opening towards the rear of the hood allowing the Callaway supercharger to poke out of the engine bay. The carbon fiber hood opening surround and integrated air extractor is as function as it is great looking while a pair of “Supercharged” emblems on each side leaves onlookers with no question as what they are admiring.

The only other exterior modifications to the Callaway SC610 Corvette are the Callaway emblems on the front fenders and the nine spoke wheel package that is not yet available (arriving spring 2014). Inside, the Callaway tuned 2014 and 2015 Corvette Stingray features unique door sill guards, Callaway floor mats, a numbered dash plaque and a Callaway branded key fob. Finally, the most vital portions of the Callaway SC610 package are found under the hood with the addition of a new Eaton TVS Twin Vortices Series supercharger, a Callaway Honker High Flow Intake System and a Callaway Double-D stainless steel exhaust system to the Stingray's LT1 V8.

When these components are installed and the engine is tuned to make the most of those modifications, the Callaway SC610 offers Corvette Stingray drivers a whopping 610 horsepower and 556lb-ft of torque – enough to help these specially equipped C7 Corvettes hit 60 miles per hour in just 3.4 seconds while running through the quarter mile in 11 seconds flat with a trap speed of 125 miles per hour. Interestingly, those are the exact same estimated performance figures that Callaway lists for the C6-based SC606 so when put head to head, it seems as though Callaway’s C6 and C7 packages for the basic Corvette (non-Z06) are fairly close in straight line performance.

The SC610 2014 Corvette Stingray also comes with underhood badging with the car’s VIN along with authenticity documentation and the paperwork for the 3 year, 36,000 mile warranty.

While this early Callaway SC610 package for the 2014 and 2015 Corvette Stingray sticks to adding power and some aesthetic items, Callaway has a great deal more planned to hit the market in the Spring of 2014. In addition to the aforementioned nine spoke wheels, Callaway also plans to introduce a coil-over suspension package featuring double adjustable dampers, a short throw shifter, a high performance “LeMans GT” braking package, a sport interior package, a carbon fiber body package, a carbon fiber rear splitter, a carbon fiber rear spoiler carbon fiber rocker panels and – of course – the truly unique AeroWagon conversion for those C7 owners who would rather have a 610 horsepower Corvette station wagon.

Pricing hasn’t been announced yet for the Callaway SC610 package for the 2014 and 2015 Chevrolet Corvette Stingray but with these packages expected to begin hitting the market soon, we can expect pricing to be announced in the near future for the SC610 package while the numbers for those not-yet-available items will likely come out closer to their production debut.

Mike Vendetto -... wrote on January 21, 2014 - 8:45am Permalink
2014 Callaway Corvette package price has been announced: $22,995, same as 2013 price.
Auto Motive wrote on January 21, 2014 - 10:12am Permalink
Nothing nicer than a basically one off vehicle like the 610C. I myself look forward at the pricing for the Z later this month. I would speculate pricing should be around $120k base with a fully optioned Stage 4 at $150k or more. Coming in 2016 will be the SRT Avenger coupe powered by the new hellcat 6.2 hemi with rumored 600 plus hp and torque . Pricing pegged around $75k fully optioned. This gives SRT brand two performance vehicles. Hopefully the new SRTAvenger is light wgt around 3400 lbs which could register 0-60 numbers in mid 3s.