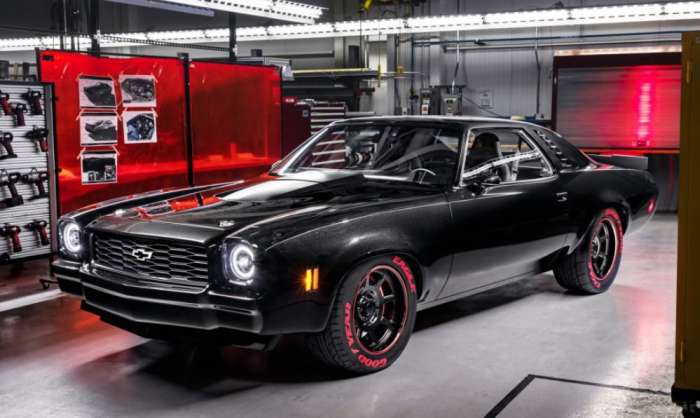 C7 Corvette ZR1 LT5 Coming to Market as a Crate Engine, Debuting in a 1973 Chevelle

We will soon see classic Chevy muscle cars cruising the streets with the 755-horsepower LT5 from the C7 Corvette ZR1, as Chevrolet Performance will soon be offering supercharged V8 in the crate engine portfolio – with the official announcement coming later this month at the SEMA Show in Las Vegas.
Advertisement

The 2019 Chevrolet Corvette ZR1 is the most powerful road-going production car ever offered by General Motors, offering 755 horsepower and 715 lb-ft of torque. That supercharged super-engine will soon be available through Chevrolet Performance as a crate engine, making it a whole lot easier to install GM’s most powerful road engine ever in all sorts of other vehicles.

The details are limited right now, but we can expect more information later this month when the LT5 crate engine makes its formal debut at the 2018 SEMA Show in Las Vegas. Rather than just displaying an engine on a stand, Chevrolet Performance has built a 1973 Chevelle Laguna with a unique look and the power of the C7 ZR1.

LT5 Crate Engine
The LT5 crate engine being offered by Chevrolet Performance will be designed to offer the same 755 horsepower and 715 lb-ft of torque as the C7 Corvette ZR1. It is unclear right now whether the company will offer a plug-and-play setup for the engine, but if nothing else, companies like Jegs will likely have a “connect and cruise” package that comes with a transmission and all of the electronics.

We don’t have pricing for the LT5 crate engine yet, but in looking around online, the LT4 crate engine tends to have an average cost of $14,000 while the Jegs package with electronics and a transmission starts around $22,000. With the LT5 being more powerful than the LT4, we can expect that it will cost a bit more, so the pricing for the basic engine could start in the $15,000 to $16,000 range, not including electronics.

That is a big price tag for a crate engine, but when you consider the power and the wow factor of opening the hood of your 1969 Corvette to reveal a 755-horsepower LT5, that cost will be well worth it.

Chevelle Laguna with LT5 Power
To showcase the Corvette ZR1 V8 as a crate engine, Chevrolet built a unique 1973 Chevelle Laguna that will be on display later this month at SEMA. As you can see in the image above, the car has been completely blacked out, with modern headlights, a NASCAR-inspired front and rear spoiler, NASCAR-style wheels with raised red letters on the tires and, of course, the LT5 engine under the hood.

Those skinny tires on the back of the 1973 Chevelle Laguna likely don’t do much in the way of traction with all of that supercharged torque, but there is no question that this classic Chevy will help draw plenty of attention to the new LT5 crate engine option at SEMA.