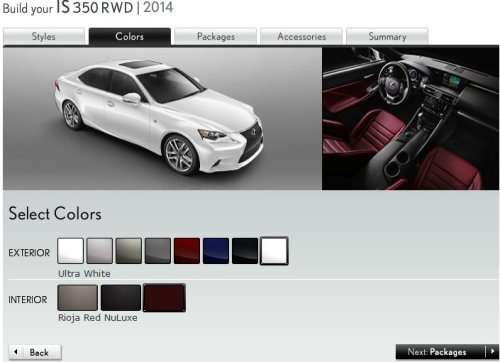 Build your 2014 Lexis IS online now

The redesigned 2014 Lexus IS will help to shake up the compact luxury sedan segment with its aggressive design, plush interior and exhilarating drive attributes and those folks eagerly waiting to put one of these new Lexus sedans in their garage can build them online now – as the company has launched the build page for the 2014 IS lineup.
Advertisement

Regardless of which of the four trimlines for the 2014 Lexus IS sedan is chosen, buyers can pick from eight exterior colors and five interior shades – all of which are available with no additional fee. Once you have chosen your ideal trimline, interior color and exterior color, the 2014 IS configurator varies a bit depending on the trimline chosen.

Those who are leaning towards the 2014 Lexus IS350 in rear drive form get only three option packages in the form of the Navigation Package and two slightly different F Sport Packages while the 2014 Lexus IS350 AWD sedan has six option packages of its own – the Navigation Package, two F Sport Packages and three different Luxury Packages with pricing ranging from $4,803 to $7,215.

Once you have selected the trimline and option packages in the 2014 Lexus IS configurator, you are directed to pick from a collection of accessories that are uniform across the four different trimlines. This short list includes items like a cargo net, remote start, a Lexus rear bumper appliqué wheel locks and unique 18” alloy wheels.

Were I to build my ideal new IS sedan – having had the chance to drive the full lineup on both a closed circuit and the open road – I would opt for the 2014 Lexus IS350 RWD sedan. While the AWD setup might be great for those who need it, I do not so I would rather not have the weight adding features of the advanced all wheel drive system. My 2014 IS350 would be Ultra White on the outside with the unique Rioja Red interior package. I prefer the Matador Red Mica exterior paint with a black interior but the build site doesn’t allow you to configure the IS350 RWD with the F Sport package in that exterior color and in the long run – I’d rather have a white F Sport than a dark red “base model”.

Next, I would opt for the F Sport package that includes the incredible Mark Levinson Sound system along with all of the other goodies of the IS350 F Sport package which adds $7,921 to the final price – but it is well worth it. I would also add the remote engine starter and the optional wheel locks which combine to add another $572 to the final price. In the end, my beautifully equipped 2014 Lexus IS350 would carry a price of $48,853 including the F Sport Package, the wheel locks, the remote starter and the $895 destination fee. That really isn’t a big price tag for a car that delivers so much luxury and so much fun to drive factor with enough room to comfortably seat four adults. You can click here for my first drive piece on the 2014 Lexus IS where I look at the newest compact sedan compared to the outgoing 2013 IS.

Click here to head over to the Lexus webpage to build your own 2014 IS sedan!