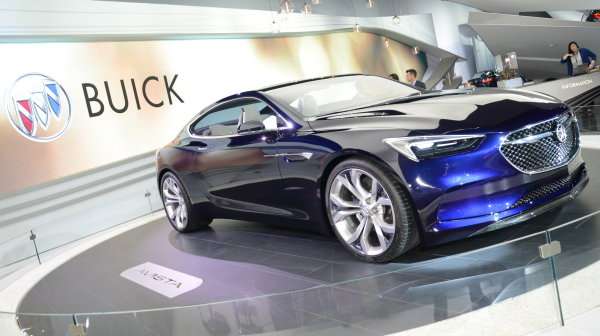 It has been many moons since the Buick brand has offered up a 2-door car, but the debut of the new Camaro-based Avista Concept at the 2016 North American International Auto Show is clear proof that General Motors has at least considered a new Buick coupe.
Advertisement

I had a strong feeling coming into the 2016 Detroit Auto Show that we wouldn’t be seeing a great many American performance debuts, since the current Challenger, Mustang, Camaro and Corvette are all within their first few model years. I never expected that General Motors would bring out a sexy new Buick concept coupe based on the 6th gen Chevrolet Camaro platform, but I am glad that they did – because I am a little bit in love with the Buick Avista.

The Avista is Beautiful
The Buick Avista is based on the same Alpha platform that underpins the 2016 Chevrolet Camaro and the Cadillac ATS, but with this sexy new Buick having the same front and rear track and the same wheelbase measurements as the Camaro SS – it is reasonable to say that this is kind of like Buick’s version of the Camaro in concept form.

Looking at the Buick Avista from any angle, it is hard to see any Chevrolet Camaro. The Buick is shorter in front of the engine and behind the rear wheels than the Camaro, while the Avista roofline is much more fluid and rounded than the Chevy muscle car. Really, the entire Avista Concept is rounder than the Camaro on every side and as a result, this Buick doesn’t look like a rebadged Camaro. This is a car that could stand apart from the Camaro with its premium design inside and out, so in calling it a "high class Camaro", I don't mean to insult the Camaro as much as I want stress the luxury level look and feel of the new Buick Concept.

On the inside, the Buick Avista has a futuristic, higher end look than the Camaro, while the long roofline affords rear passengers a touch more seating space. This is the kind of interior that we would call a concept interior and while very attractive – I would say that the interior displayed on the concept is far too dramatic for a production vehicle. However, the interior is really the least interesting aspect of the vehicle.

Twin Turbo V6 Performance
The Buick Avista shares a chassis with the 2016 Camaro, but the engine is unique to this concept coupe. Under the hood is a new 3.0L twin turbo V6 that has been specially tuned to produce 400 horsepower. That power is channeled to the rear wheels via the quick-shifting 8-speed automatic transmission and, like the Camaro SS, the Buick Avista sports Brembo brakes and the newest Magnetic Ride Control system. We don’t have a curb weight figure, but this 400hp twin turbo Buick should be a real blast to drive.

Realistically, much of the Buick Avista is “too much” for production, but with a simple taming of the interior and some slightly more production-friendly headlights – this Camaro-based Buick concept could lead to one beautiful production car. I would go so far to say that if Buick makes a car that looks anything like this, including the 400hp engine, it will be the most exciting Buick since the 1970s.