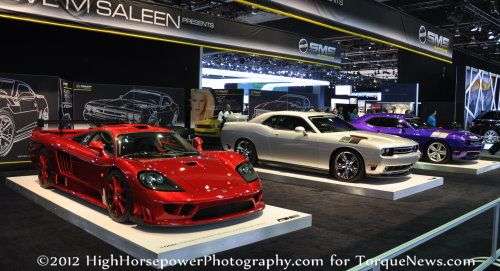 Steve Saleen announced yesterday that after a court battle that spanned several years, he has won the right to use his own name once again after the company who purchased the Saleen brand in 2007 prevented Mr. Saleen from using his name when he left the company.
Advertisement

Steve Saleen founded his company in 1984 and began building high performance Mustangs for both race and street use. However, when he began seeing the company that wore his name headed in a direction that he didn’t like in 2007, he decided to leave the company that he had founded and turned into a Mustang-tuning juggernaut. Unfortunately, after Steve Saleen left the company, the organization was sold to the company MJ Acquisitions. This new owner continued offering performance parts and new high performance Mustangs after the 2007 purchase but the new parent company refused to honor warranties on vehicles or components sold prior to the buyout.

It was also during this time that Steve Saleen, who had gone on to start a new company focusing on all American muscle cars and not just the Ford Mustang, was told by the new owners of the Saleen brand that Steve could not use his name on his new vehicles. As the court battle began, the new high performance Mustangs, Challengers and Camaros designed by Steve Saleen were marketed successfully under the brand SMS Supercars. During that same period, the original Saleen brand continued to struggle amidst loads of bad publicity on internet forums over warranty issues and poor customer service. Then, in March of 2011, Saleen announced that they would stop building cars although the Saleen Speedlab would continue making performance parts for the Ford Mustang.

Yesterday, it seems as though the automotive universe was set back on its axis as the United States judicial system finally judged on the side of common sense – awarding Steve Saleen the right to use his brand name and sell the products that are so popular due to his name.

Now that Steve Saleen has won the right to use his name once again, the SMS Supercars will soon be sold under the Saleen name. This includes models like the SMS 570 Challenger, the SMS 302 Mustang, and the SMS 620 Camaro but as the revitalized Saleen brand moves forward, we can expect to see the return of the trimlines made famous by Steve Saleen’s Mustangs since 1984. This will include the return of the SC, SSC and X versions of the Saleen vehicles but unlike the old Saleen brand – the new Saleen will offer ultra high performance models of all three American muscle cars.

Steve Saleen offered these comments in light of his victorious court battle:
"In 2007, it was a difficult decision to resign from Saleen, Inc.", said Steve Saleen. "But I knew it had to be done in order to preserve the Saleen brand and to ensure the authenticity and high performance that our customers had come to expect. Although the Saleen brand is a huge part of my identity, I knew it was the vision and passion that would shine through on my signature vehicles. However, it couldn't have been done without the support of the Saleen community. The foundation and inspiration that they gave me to move forward with my vision was what ultimately moved us to regain the Saleen branding. Most importantly the Saleen community gets their identity back as well."

In addition to getting the Saleen brand of high performance vehicles back on track, the company will continue selling high performance parts for all of the vehicles which they service. Those who bought SMS Supercars vehicles over the past 5 years will be offered the option to have their vehicles rebadged as Saleen models – along with being included in the soon-to-be-updated Saleen Registry.