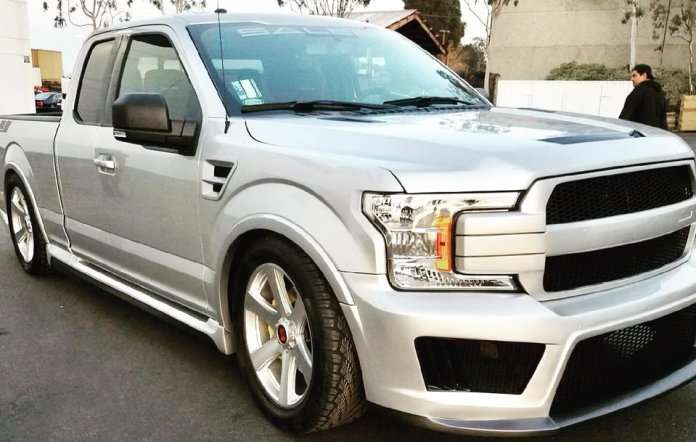 This past weekend, the crew from Saleen Automotive introduced their new F150-based Sport Truck at the Barrett-Jackson Scottsdale event, packing 700 horsepower into a uniquely-designed Ford pickup – and it can be ordered with the regular cab configuration.
Advertisement

Saleen Automotive is one of the best-known names in the world of post-title performance packages and while the company services a variety of brands including Chevrolet, Dodge and Tesla, the tuning company is most closely associated with Ford Motor Company. Saleen started out modifying Ford Mustangs for road racing and over the years, the company has issued a long list of high performance Ford products including the Mustang, the Focus and the F150.

At this past weekend’s Barrett-Jackson Scottsdale auction event, Saleen introduced their newest high performance model in the form of their new Sport Truck. Obviously based on the new Ford F-150, this is the most powerful pickup from Saleen along with being one of the most powerful post-title truck packages available in today’s market.

“This addition to the product lineup demonstrates the Saleen Company’s commitment to its Brand and continued growth in the sport car and truck markets, returning Saleen back to its position of dominance,” stated Saleen Automotive President Amy Boylan.

The Saleen Sport Truck
As you can see in the image above, the new Saleen Sport Truck is based on the 2018 Ford F150. Saleen begins by adding a new front fascia, grille, hood, fenders, rockers and rear bumper along with unique wheels and plenty of Saleen badges and graphics, but appearance takes a back seat to performance.

Under the hood is a supercharged version of Ford’s 5.0L V8, delivering a whopping 700 horsepower and announcing its presence via a new Saleen high flow exhaust system. This custom F150 also features a Saleen Racecraft Suspension setup with unique springs and shocks all around along with unique bushings and a front sway bar.

In short, the 2018 F150-turned-Saleen Sport Truck is one of the quickest and strongest half-ton pickups you can buy right now, but it should also handle very nicely for a big truck.

Best of all, the new Saleen Sport Truck is available in all three cab configurations of the 2018 F150. This means that you can buy a 700 horsepower, regular cab F-150 with the unique Saleen look and handling characteristics. The previous Saleen Sport Truck was only offered in extended cab form, leaving those folks who essentially wanted a modern day Ford SVT Lightning out in the cold.

We don’t have the exact pricing yet, but Saleen has stated on their Facebook page that the regular cab Sport Truck will start in the mid-$50k range and while the largest, loaded Saleen-tuned F150 will climb into the $80k range.

“The return to our heritage with the Saleen Sportruck is a perfect fit for our program. We now have a full line of high-performance vehicles carrying the Saleen Brand,” said Saleen CEO Steve Saleen.