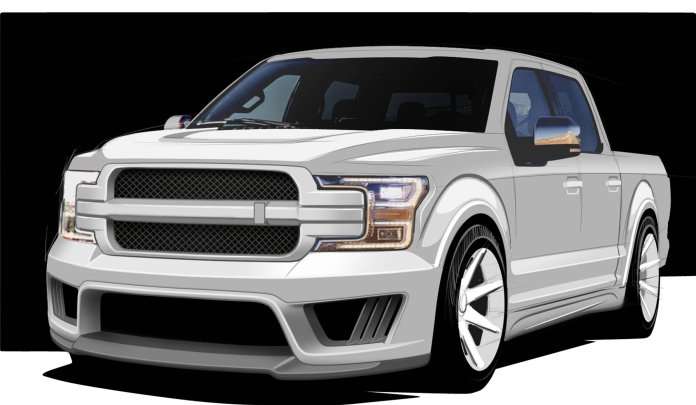 Saleen Automotive announced this morning that they will soon offer a high performance package for the 2018 Ford F150 called the Sportruck and while the details are short right now – we know that the top of the line Saleen F150 will pack 700 horsepower.
Advertisement

Saleen is best known for modifying Ford Mustangs, but in the long and storied history of the tuning company, they have offered some trucks as well – including the Saleen S331. Back in 2007, the Saleen S331 F150 was a pickup with muscle car performance, featuring a supercharged V8 delivering 450 horsepower, making it one of the faster trucks on the road back then.

The 2018 Saleen Sportruck follows the S331, with a supercharged 5.0L V8 delivering 700 horsepower, but Saleen will also offer performance packages for the other engines in the 2018 F150 lineup.

Saleen plans to offer performance packages for every 2018 Ford F150 engine, including the base naturally aspirated V6, both of the EcoBoost V6 engines and the 5.0L V8 – with both naturally aspirated and supercharged options for the V8. We don’t get any power figures in the Saleen statement and the new Sportruck is not yet listed on their website, but we know that the supercharged 5.0L V8 package will deliver an awesome 700 horsepower.

“We are excited to have returned to our heritage with a high performance Saleen Sportruck that fits perfectly within our program for a full line of high performance vehicles carrying the Saleen brand,” said Steve Saleen, CEO of Saleen Automotive. “Our truck heritage includes many race wins in our Ranger-version of the Saleen Sportruck followed by the extremely popular Saleen S331 Sportrucks. Ford chose to use Saleen Superchargers on the Harley Davidson F150 editions, which were installed at the Saleen factory in Troy, Michigan. The time is right that we return to the market with a product that feeds an audience of hungry Saleen truck enthusiasts.”

Shy of the big power, the 2018 Saleen Sportruck will add a new front fascia with functional air dams and brake cooling ducts, along with a new grille design and a unique hood. Along the sides, the newest Saleen F150 has unique side skirts and custom Saleen wheels wrapped in General Tires and out back, there is a unique Saleen tailgate applique. On the inside, the Sportruck will get Saleen badging and in addition to the added power – the new Sportrucks will feature a Racecraft suspension system, a big brake package and an exhaust system which ends with large polished tips.

Saleen expects to begin selling the 2018 Sportruck package starting in November and by then, we should have full details on this new high performance pickup. When that information becomes available, including the power boosts for the other engines, you will find it here on TorqueNews.com.