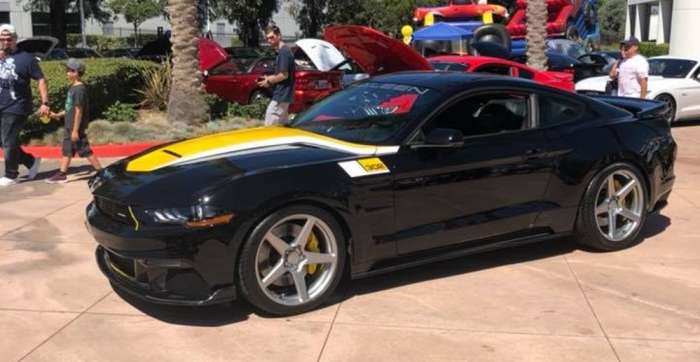 Saleen Automotive is celebrating 35 years of tuning the Ford Mustang, so as the company has done in the past for significant birthdays, a limited edition package has been introduced with monster power and a long list of other upgrades.
Advertisement

It is practically impossible to discuss post-title packages for the Ford Mustang without bringing up the Saleen name. Steve Saleen’s company rolled out their first high performance Mustang back in 1984, so with the arrival of the 2019 model year, the company is celebrating 35 years of go-fast packages. Over the course of the past 35 years, Saleen has offered up limited edition models to celebrate key anniversaries such as their 5th, 10th, 20th and 30th with models like the SA 5, the SA 10, the SA 20 and the SA 30 with SA standing for Saleen Anniversary followed by the number of years.

With that in mind, it should come as no great surprise that for their 35th anniversary of post-title Ford Mustang packages, Saleen is rolling out the SA 35.

35 Years, 780 Horsepower
The Saleen SA 35 package for the 2019 Ford Mustang GT is based on their Black Label package, so it is their top-of-the-line configuration. This includes a new front fascia, a new hood, unique side skirts, a new rear wing, a new lower rear fascia, a unique taillight panel, forged monoblock wheels and plenty of unique badging from front to rear.

Next, the SA 35 Mustang features a Saleen Racecraft R-Code suspension setup, but the most important aspect to many people is under the hood. This anniversary edition pony car is fitted with a supercharger and a free-flowing exhaust system that work together to increase the output to a whopping 780 horsepower and 630 lb-ft of torque.

We don’t know how much the SA 35 Mustang will cost, but with such an elaborate upgrade list and only 10 examples slated for production, they are probably going to be pretty pricy. However, for the deep-pocketed Mustang fan who wants to have a very powerful, very unique pony car, the Saleen SA 35 is certainly an interesting prospect.