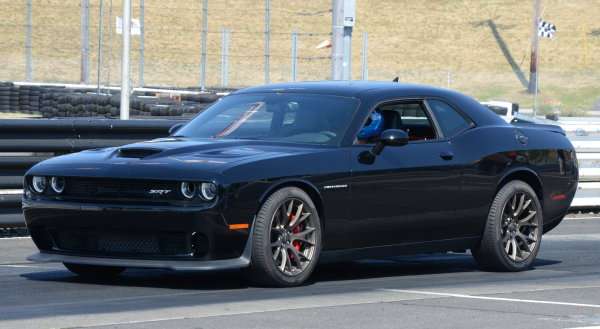 While the NHRA has certified that the 2015 Dodge Challenger SRT Hellcat will run 11.2 with stock tires and an experienced racer, my observations at the media launch of the 707hp beast lead me to believe that anyone who is racing on a well prepped drag strip will be able to run in the 11 second range – even if they have very little racing experience.
Advertisement

When I went to Portland to drive the entire 2015 Dodge Challenger, I was fortunate enough to make a few passes down the drag strip. For those who do not know me, I grew up drag racing and I have made a few thousand quarter mile runs in my days. Based on my experience, I was hoping to be able to get close to that official NHRA certified time.

I did not get closer to the Challenger Hellcat’s NHRA time on the slick, unprepped track, but I was happy that I was one of the few media members on hand who was able to crack into the 11 second range with a best time of 11.8. This is a far cry from the stock 11.2 times, but as drag strip surfaces go, Portland’s was about as raw as possible and I am confident that if I was racing the Hellcat Challenger on a nice, sticky track with a chance to make more than two runs – I would get closer to that 11.2 time. However, what about someone who hasn’t spent a large portion of their lives at the race track?

Well, based on what I saw from other journalists who were making drag strip passes in the 2015 Dodge Challenger SRT Hellcat – I expect that even the most inexperienced owner will be able to run in the 11s on a good track…and with the help of the Challenger’s launch control feature.

Watching an Inexperienced Driver Run Low 12s
Portland International has an awesome road course and the front straightaway doubles as a quarter mile drag strip, but there was no track prep like I would expect at a full time drag strip. Every track that I have been to sprays a sticky substance on the track for at least the first 60 feet, followed by a procedure that includes dragging a rubber sheet along the sticky track. This allows very high powered cars to get much better traction than you would on your average public road. There was none of that at Portland so in terms of drag racing conditions – they were less than ideal.

Before we began racing, I was talking to one journalist who literally knew nothing about drag racing so his plan to race the 2015 Dodge Challenger SRT Hellcat was to use the launch control system, let the transmission shift by itself and just hold the pedal down with the hopes of keeping the car pointed down track. I was skeptical of his approach, but on his first run, he ran a 12.2 quarter mile. That is a second slower than the NHRA certified time, but that time was turned in by a guy who literally had to have drag racing explained to him 5 minutes before getting into the car. This guy had never drag raced and thanks to the launch control system, he was able to run a 12.2 on a very slick track. On his next run – guess what? He did everything the same way and ran an identical 12.2.

If a guy who has never drag raced can get into the Challenger SRT Hellcat and run back to back 12.20s with no seat time on a slick track, I strongly believe that anyone using the launch control feature on a sticky track – especially with some seat time – will be able to run in the 11 second range. Launch control allows you to pretty much floor the throttle and the system does the rest, monitoring traction levels to adjust the power output to the wheels to get the big beast moving down the track as quickly and as efficiently as possible. The video below shows a Hellcat Challenger leaving the line using the launch control feature and as the car passes the camera, you can hear the slight adjustments being made to the throttle as the car gets moving.

Launch Control Makes it Fast, Experience Makes it Faster
While anyone using the launch control feature in the 2015 Dodge Challenger SRT Hellcat can expect to run low 12s and even high 11s on a good track, there is no replacement for experience. This is proven by the fact that the quickest drivers on the quarter mile in Portland were all going without launch control so while the computerized system makes launching easier and makes times more consistent – the quickest times by the Hellcat Challenger will be turned in by those drivers who are relying on their own abilities rather than the on-board electronics.

Using the launch control feature of the new Dodge Challenger SRT Hellcat leaves some room for improvement, this high tech system should allow pretty much anyone to run very near (if not in) the 11 second range and that will allow owners – even those who have not spent any time at the track – to run heads up with almost any new car sold in the world and keep the race very close.