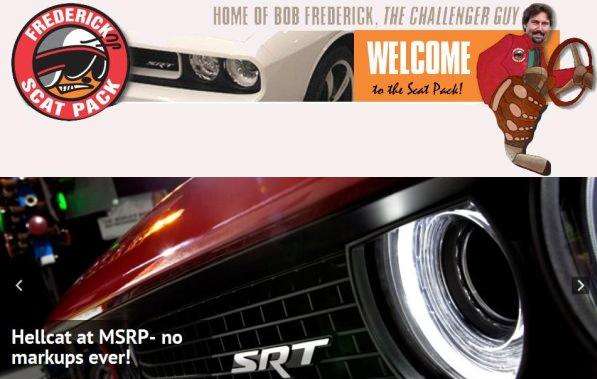 Yesterday we talked about how dealerships were charging $10-20k over MSRP for the 2015 Dodge Challenger SRT Hellcat and today we bring you all a man who can get you a 707 horsepower Mopar muscle car at the factory MSRP – Bob Frederick…”The Challenger Guy”.
Advertisement

Earlier this week we looked at a complete list of option prices for the 2015 Dodge Challenger SRT Hellcat on the Frederick Scat Pack website but we failed to mention the most important bit of information on the site. Bob Frederick, the founder of the Frederick Scat Pack website, offers a premium Challenger Hellcat buying experience and best of all, he does so without any dealership markup. In other words, going through Bob Frederick to buy your 707 horsepower Dodge Challenger will allow you to pay list MSRP on the car itself, the options and even some performance goodies as they become available.

The 2015 Dodge Challenger SRT Hellcat is the most powerful American production car ever so it seems fitting that the best person to buy this 707hp monster from is a man known as The Challenger Guy. Someone with a moniker like that would be the obvious choice for those who want someone else to do the legwork in acquiring the Hellcat Challenger, but the fact that he can get you the hook up at MSRP is simply awesome.

To make ordering a Hellcat and getting in touch with him easier, Bob opened the FrederickScatPack.com website with pictures of past Frederick projects and complete information on the 707hp Challenger – along with all of the ways to get in touch with Bob to proceed with your order.

Orders are Lining Up
If you want to buy a 2015 Dodge Challenger SRT Hellcat at MSRP without having to hunt around, you may want to contact Bob Frederick soon. I spoke with him earlier this week and he told me that he has already taken orders for a handful of Hellcat Challengers, including cars that will be shipped to New York, California and Texas. With the cars being sold at MSRP, he is likely to quickly amass a long list of customers with cash in hand so if you want a real shot at getting a Hellcat as soon as possible – head on over to the Frederick Scat Pack website for more information!

Fortunately, while there are obviously some dealerships who are charging big markups and still getting orders for the 2015 Dodge Challenger SRT Hellcat, the fact that Bob Frederick is selling Hellcats at MSRP should push other dealers to do so as well. This should be especially true once the initial rush for the car has been satisfied, as any models left sitting on dealership lots around the country could be snatched up with Bob’s help.

Tim D Halpin wrote on August 1, 2014 - 8:55am Permalink
Very interested in 2015 Challenger Hellcat. I am serious, not playing / dreaming
Lee Gibson wrote on August 8, 2014 - 6:19am Permalink
Time to move up from my 556hp CTS-V to a a 707hp hellcat Any colors other than red??
Jay James wrote on August 22, 2014 - 5:06pm Permalink
Great to work with Bob. Left deposit a week ago and now the waiting begins...:) It would be nice if Dodge opens the order portal sometime before the next ice age. I was pleased to read that the car's HP may be underrated. According to an article I read regarding a K&N test they had like @ 640 to the wheels and using some formula they calculate it to be more like 747 at the crank. It just keeps getting better. Like most enthusiasts I always wanted an exotic "Supercar" but now that I have found this animal I actually think I prefer it to even a top end Ferrari and forget about a Porshe. This is just so much cooler AND it can out perform most all (in a straight line). Kudos to Dodge and Bob for all the help. God Bless America!
Alan wrote on August 1, 2014 - 11:21am Permalink
I work with Bob when I was waiting for my 2008 SRT8 and he was great. He knew everything there was on my car from the time it started production to when it was loaded on a freight car on its way to me. I will be contacting Bob if my local dealer decides to back out of the deal he has already offered me. I went to local dealer and said I was taken for $10k over sticker for my 2008 SRT and will not be taken again, if you want that I will go out of state for my car. The dealer looked at me and said no one does that any more and offered me sticker with no problem. Now to see if he will still honor on Wednesday when he can place the order. If not Bob will be getting my call.
Wade Gagnier wrote on August 31, 2014 - 2:08pm Permalink
Looking for a black on matte black, if possible have a ghosted logo in it, this can be done with us locally just giving out the info, 2015 challenger 707 hellcat, purchase before spring of 2015. Thank you, Wade
cecil margosian wrote on November 1, 2014 - 12:03am Permalink
Bob, I'm looking to order a Challenger Hellcat, here in Ca. If you have an allocation, I'm very interested in ordering from you. You have been recommended by Valiant Showoff on the Challenger Forums. This would be a cash sale. I know most of what I want except the color. I will try to call you tomorrow. I also plan to go to the local dealership to get a better look at the colors. Do you have an idea as to the cost of shipping to me?
charles bosone wrote on November 18, 2014 - 8:36pm Permalink
i would like to purchase a hellcat will put down deposit today,phone 281 543 0942. thanks
Lars Jeffry wrote on December 14, 2014 - 10:51pm Permalink
Bob is awesome! I have been reading a number of horror stories about dealers trying to gouge would be Hellcat buyers on Hellcat.org. Not only is Bob knowledgable but he is honest. I am glad I found out about him. Looking forward to getting my new Hellcat in a few months.