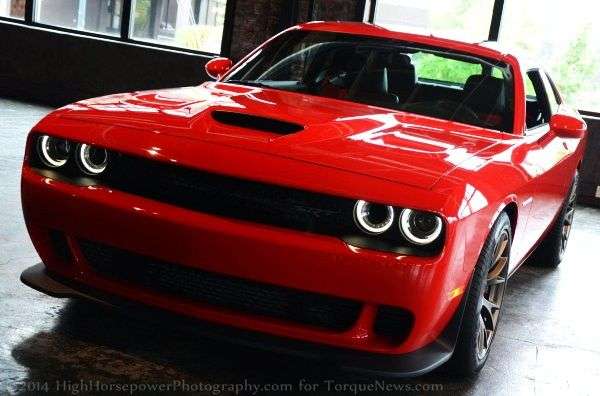 Since we learned that the 2015 Dodge Challenger SRT Hellcat would have 707 horsepower from a new supercharged Hemi, the critics have demanded to know the weight and not surprisingly, the Hellcat Challenger is pretty heavy with a curb weight of 4,439lbs – but that weight is hardly noticeable whether you are blasting down the quarter mile or rocketing around a road course.
Advertisement

Since the modern Dodge Challenger was introduced for the 2008 model year, it has been criticized for being by far the heaviest option in the muscle car segment. Many Mopar fans had hoped to see the Challenger cut some weight with the introduction of the 2015 models, but with the new generation of the Challenger having many of the same dimensions as the outgoing version – there was likely no weight loss plan included. Because of this, many of the Mustang and Camaro fans looking for a reason to discredit the Hellcat have insisted that the Hellcat Challenger wont be a real performance factor because of its weight.

Even when the Hellcat Challenger turned out a better NHRA certified stock time than anything from Ford or General Motors – the haters clamored that it will weight too much to compete. While the Hellcat Challenger’s 707 horsepower supercharged Hemi, the dual mode suspension setup, the retuned chassis and the massive braking package allow the beast to handle itself well in any setting – it is still pretty heavy.

In fact, the Hellcat Challenger is, by far, the heaviest of the modern American sports cars with a curb weight starting at 4,439 pounds.

The Hellcat is a Big, Heavy Beast
The 2015 Dodge Challenger SRT Hellcat is by far the most powerful American production car of all time. While tuners have created packages for the Ford Mustang, the Chevrolet Corvette, the Chevrolet Camaro and the Dodge Viper that make far beyond 707 horsepower – no production model has ever packed more stock power. It needs all of that power, too, as the lightest of the factory supercharged SRT Challengers weighs a hefty 4,439 pounds. That is the curb weight for the SRT Hellcat model with the 8-speed automatic transmission that I ran an 11.8 with on Portland International Speedway’s quarter mile drag strip.

Those who opt for the 6-speed manual transmission in their Challenger SRT Hellcat might expect a lower curb weight, as manual transmissions devoid of a fluid filled torque convertor generally weighs less than an automatic unit with the extra parts. However, the manually shifted Hellcat Challenger actually weighs 10 pounds more than the automatic models. Fortunately, I have driven both of these monsters on the track and I can positively state that the extra ten pounds doesn’t make the most powerful muscle car ever any less exciting to drive.

In fact, the point that the Challenger SRT Hellcat weighs over 4,400lbs never comes into your mind when you are driving this beast. Whether you are pushing the car down the quarter mile with enough urgency to get into the deep 11s or putting the suspension to the limits on a road course, the Challenger Hellcat doesn’t feel heavier than the outgoing models.

Comparison to Other Challenger Models – Old and New
The 2015 Dodge Challenger SRT Hellcat is the heaviest muscle car of the modern age and it might be the heaviest muscle car ever…with a portion of that due to the added features of the Hellcat Hemi. For example, the 2015 Dodge Challenger SRT 392 – which is mechanically very similar to the Hellcat models with the exception of the forced induction components – tips the scales at 4,251lbs with the 8-speed automatic transmission. The manual transmission SRT 392 is actually 11 pounds lighter, coming in at 4,240lbs for the 2015 model year. The 2014 Dodge Challenger SRT 392 weighs 4,160lbs…80 pounds less than the comparable 2015 model and 179lbs less than the 2015 SRT Hellcat.

In terms of cross town competition, the 2014 Chevrolet Camaro ZL1 weighs 4,120lbs and the 662hp 2014 Ford Mustang Shelby GT500 weighs a svelte 3,845lbs. The track ready Camaro Z/28 weighs just 3,837 pounds…making it the lightest of the modern muscle cars – though it should be noted that the Z/28 comes stripped down for racing purposes.

The 2015 Dodge Challenger SRT Hellcat is very, very heavy…but so is the Bugatti Veyron and everyone loves that monster. The Challenger doesn’t quite pack the punch of the million dollar Bugatti, but it packs enough power to get down the quarter mile faster than any stock muscle car ever while still being able to roar through the corners. Heavy or not – everyone who drives the Hellcat Challenger will love it for the sheer excitement of all of that power.

david wrote on August 4, 2014 - 5:07pm Permalink
Hey it is what it is.. a big broad shouldered cruiser that hauls a**. I have a 2012 SRT Challenger and yes it feels a little heavy in slow traffic come to think of it but get some open space, touch the sport mode and put your foot down and it's light as a feather.
Giovanni wrote on August 5, 2014 - 10:25am Permalink
Patrick, you got to drive both the Manual & Automatic versions of the Hellcat. What was your preference for over all performance and enjoyment for either version, both on and off the track?
Mark wrote on August 5, 2014 - 3:46pm Permalink
Ditto to Giovanni's question.
mark wrote on August 5, 2014 - 3:55pm Permalink
Great question Giovanni Patrick, please elaborate on the manual vs Automatic question.
Patrick Rall wrote on August 6, 2014 - 1:53pm Permalink
Mark and Giovanni, thanks for asking. I did a piece on this today and while links dont work in our comments (we were getting spammed like crazy for a while), look for the piece in the TorqueNews.com Dodge section titled 2015 Dodge Challenger SRT Hellcat: Manual or Automatic? I touch on the pros and cons of them both and give the verdict on which I would buy. You can also copy the link below and paste it into your browser: http://www.torquenews.com/106/2015-dodge-challenger-srt-hellcat-manual-or-automatic
Griz Hunter wrote on October 30, 2016 - 1:04am Permalink
I will never buy one of these hogs unless they get the weight down by at least a thousand pounds!
Alannah wrote on August 18, 2018 - 10:28am Permalink
I got what you mean,bookmarked, very decent site.
Old man wrote on January 7, 2020 - 9:11pm Permalink
I got a challenger. I’m going to try to get a hellcat next. I’m a simple man. If it goes fast I like it. Since it is the fastest car of 2015. I would think stressing my point any further wouldn’t be necessary.