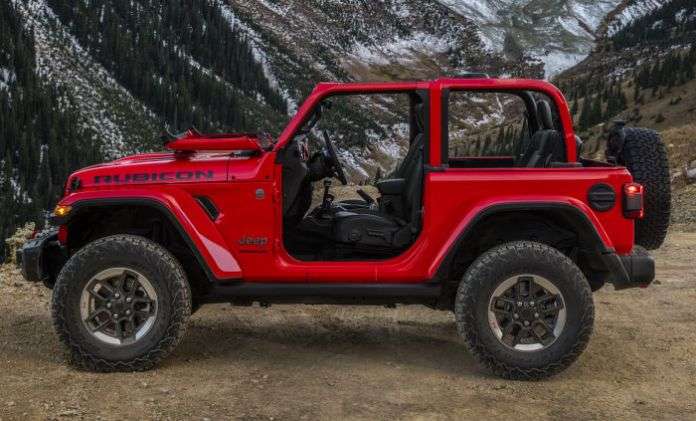 The all-new 2018 Jeep Wrangler will make its formal debut later this month at the LA Auto Show, but FCA has rolled out the first official images of the next generation of the legendary SUV – and it looks a whole lot like the current Wrangler.
Advertisement

During the Mopar press conference at SEMA yesterday afternoon, FCA’s aftermarket division rolled out a collection of upgrade items for the 2018 Jeep Wrangler. This seemed a bit odd, as the vehicle itself has not been formally introduced, but in addition to the Mopar accessories for the new Wrangler, the company offered up the first official images of the new Jeep.

Meet the 2018 Jeep Wrangler
There is no Jeep model which has become more iconic than the Wrangler, so the all-new 2018 Wrangler hits the market with a tremendous amount of anticipation from the automotive community. There have been enough spy shots captured over the past few months that there were few questions as to what the new Wrangler would look like, but we don’t have to rely on quick glimpse of camouflaged test vehicles – the new Wrangler is officially here (in images).

Unfortunately, FCA didn’t offer up any specific details on the 2018 Jeep Wrangler, so we don’t have anything on the drivetrain options, but the company has highlighted a few of the features of the next generation SUV.

The follow information was included in the 2018 Jeep Wrangler press release:

“The most capable SUV ever delivers even more legendary Jeep 4x4 capability, a modern design that stays true to the original, advanced fuel-efficient powertrains, more open-air options, and is loaded with more safety features and advanced technology than ever before. The all-new Wrangler’s unique design includes an instantly recognizable keystone-shaped grille, iconic round headlamps and square tail lamps, improved aerodynamics, a convenient fold-down windshield for off-road purists, even more open-air freedom, and dozens of different door, top and windshield combinations.”

The most significant comment there pertains to the fold-down windshield, as older reports indicated that the next gen Wrangler would lose the ability to drop the front glass. Fortunately, the engineers maintained that popular feature, so in addition to procuring the familiar Wrangler shape while also improving aerodynamics, the new Jeep carries on traditional features.

Again, the 2018 Jeep Wrangler will make its formal debut later this month at the 2017 LA Auto Show, at which point we will get to see the new SUV in the flesh – while also getting all of the vital details. Will there be a diesel option? Will a turbocharged 4-cylinder replaced the Pentastar V6? We will know in 28 days.

In the meantime, check out the teaser video below for the 2018 Jeep Wrangler.